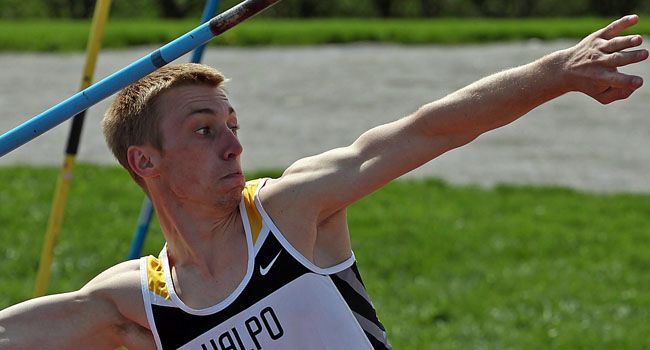 In the javelin, Getz took a first-place finish with a throw of 170’6”, while Elijah Owen (LaPorte, Ind./LaPorte) filled the runner-up position with a clearance of 167’2”.

Zosso and Jordan Kelly (Crown Point, Ind./Crown Point) each cracked Valpo’s all-time best list in the pole vault. Zosso’s height of 14’ 3 ½” was good for fourthall-time, while Kelly clearance of 13’9 ¾” was good for fifth. The Crusader teammates finished first and second, respectively.

Andrew Butts (Clayton, Ohio/Northmont) captured a second-place finish in the 200-meter dash with a time of 23.89. Butts also took second in the 400-meter dash, finishing in 49.77.

In the 100-meter dash, Ryan Shea (Tampa, Fla./Wiregrass Ranch) and Drew Baker (Edwardsburg, Mich./Edwardsburg) finished third and fourth, respectively. Shea clocked in at 12.24, and Drew at 12.27.

Up next for the Crusaders are the Texas Relays in Austin, Texas. The four day event begins on Wednesday, March 26th.