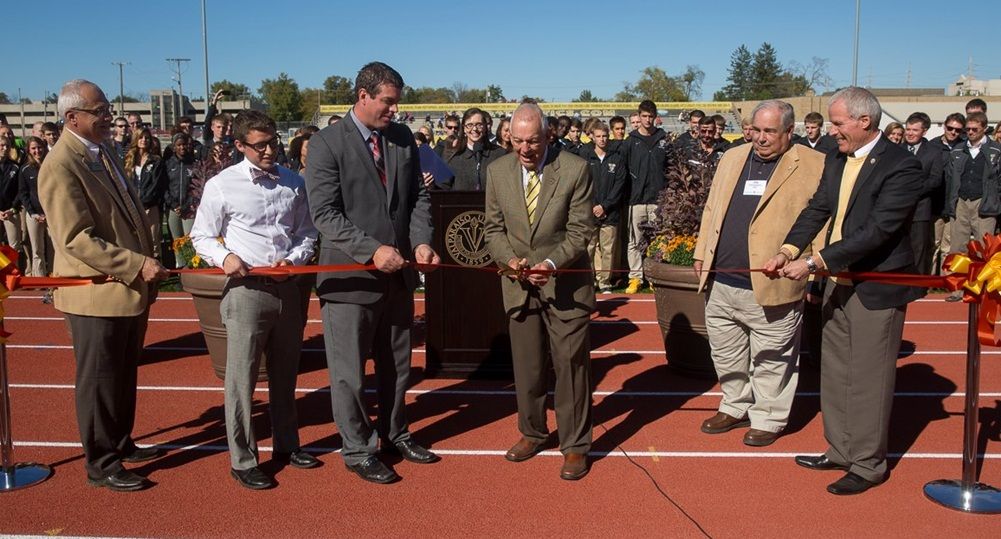 Warren Hoger cuts the ribbon during the dedication ceremony.

In front of a large Homecoming crowd, the Warren G. Hoger Track was officially dedicated at Brown Field during halftime of Saturday's football game.

The lead gift for the project came from Jay Christopher '67, '99H, and was given in honor of Warren Hoger ’53, who was a member of Valpo’s track and field team as an undergraduate and enjoyed a long, distinguished career as the track coach at Walther Lutheran High School in Chicago. In 1983, Hoger was inducted into the Illinois Track and Cross Country Coaches Association Hall of Fame.

Hoger was among the dignitaries who addressed the Homecoming fans during the dedication ceremony on Saturday.  He was joined by Valparaiso University president Dr. Mark Heckler, director of athletics Mark LaBarbera, head track and field coach Ryan Moore and track and field athlete Alex Vasile. University pastor Charlene Cox then offered a Bible reading and a blessing for the new facility before Hoger officially cut the ribbon.

The track, which features a state-of-the-art Rekortan all-weather surface, is located around Brown Field. It includes high jump, long jump, triple jump, pole vault, and steeplechase areas. The facility gives Valpo the capability to host NCAA Division I track meets, including the Horizon League outdoor championships.  The Crusaders are slated to host the facility's first outdoor meet in April of 2015.