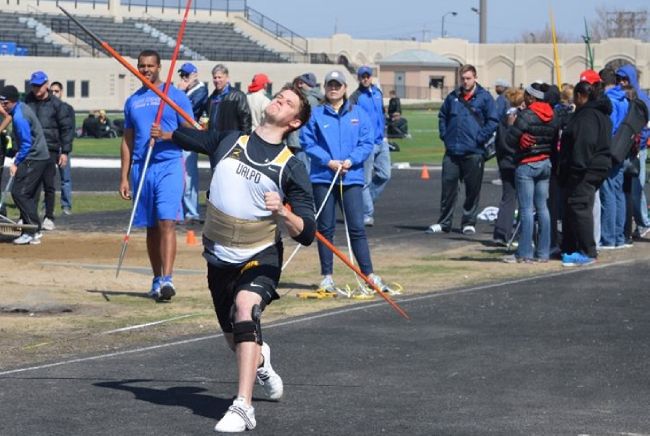 Jeremy Getz bested his school record in the javelin on Saturday.
Related Links

The Valparaiso men’s track and field team had an eventful Saturday with three meets in two different states. Some Crusaders were finishing up the three day Tennessee Relays while others took to action at the Golden Grizzly Duals hosted by Oakland University and the Hillsdale Invitational in Hillsdale, Mich.

In Knoxville, Jeremy Getz (Colorado Springs, Colo./Harrison) bested his own school record in the javelin (modern era), by over four feet with his throw of 64.84m/212-9 to take eighth. Dylan Antonides (Wauconda, Ill./Home schooled) took 16th in the event with his heave of 49.92m/163-9.

Brennen Miller (Upper Sandusky, Ohio/Upper Sandusky) took second in the javelin at the Golden Grizzly Dual with his toss of 45.52m/149-4.

Antwon Hatchett (Indianapolis, Ind./Warren Central) ran a season best in the 400 meter hurdles (59.03) to finish fourth while Mark Pinnow (Columbus, Ind./Trinity Lutheran) finished one spot behind in 1:01.73. Pinnow would also take eight in the 110m hurdles with his time of 18.28.

Valpo heads to the University of Illinois next weekend for the Illini Twilight. Full results and recap will be posted to ValpoAthletics.com.