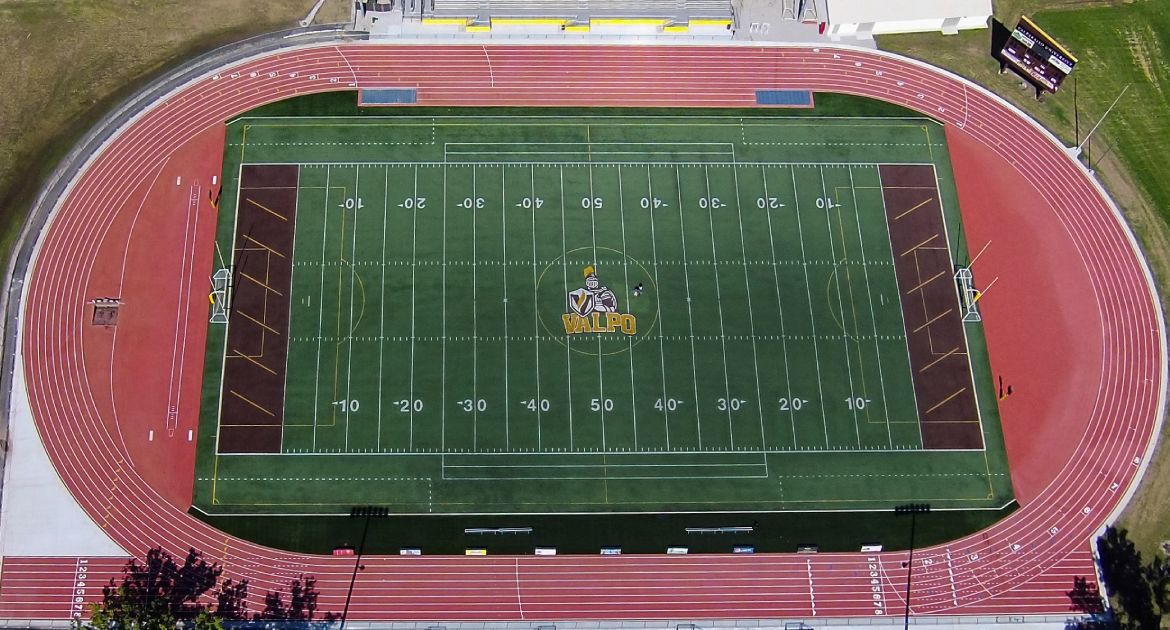 For the first time in more than 50 years, the Valparaiso men’s and women’s track and field teams will host a home meet. On Saturday morning, the Brown and Gold are set to host the inaugural Crusader Open at the brand new Warren G. Hoger Track, finished this past fall, inside of Brown Field.

“Personally it's really great to see things come to fruition, head coach Ryan Moore said. “I’ve been dreaming about since I’ve got here and there’s a lot of excitement around it and our athletes are excited for it too. It’s great for the university and we've got some great athletes to show off. I’m expecting quite a few alumni to come by tomorrow and support us.”

The Crusaders will welcome non-league opponents DePaul, IPFW, and Calumet College of St. Joseph while also hosting Horizon League foes Detroit and Oakland in a dual scoring format. The meet gets under way with throwing events beginning at 10:30 a.m. CT at Eastgate Field. At 1:00 p.m., the jumps will kick off the action at Hoger Track, with running events starting 30 minutes later. The team’s seniors will be honored in a ceremony on the track in between the running of the 5,000 meters and the 4x400 meter relay. You can follow along with the action with links to live results at ValpoAthletics.com and also on Twitter by following @ValpoTrack and @ValpoSpeed.

On the men’s team, sophomore Justin Zosso (Chesterton, Ind./Chesterton) and senior Jeremy Getz (Colorado Springs, Colo.) have been flying high and throwing far this season. Zosso bested his own standard in the pole vault twice during the outdoor campaign, the latest coming on April 4 at the DePauw Invitational where he cleared 4.75m/15-7. The defending Horizon League outdoor champion and the reigning indoor champions holds the top mark in the league by almost a whole foot.

Getz bested his own record in the javelin as well, out-throwing his previous mark by over four feet with his massive toss of 64.84m/212-9 on April 11 at the Tennessee Relays. That mark is the only one in the Horizon League over 200 feet, as Getz has out-distanced himself from the field by over 22 feet.

Senior Jacob Smutz (St. Paul, Minn./Roseville Area) and junior Jacob Frey (West Lafayette, Ind./Harrison) both hold top-six Horizon League marks in multiple throwing events. Smutz holds the second-best discus mark in Valpo history and in the league this season with his 48.17m/158-0 throw at Illini Twilight. He holds the fifth best throw in the hammer in the league (56.94m/186-10).

“It's exciting,” Frey said. It’s the first meet here at Valpo. I’m a little nervous because I’ve haven’t been at a home meet since high school and it’s a different environment because you have more family and friends there. I think it’s going to be great though and will be a boost to this program.”

One the women’s side, senior Sarah Drozdowski (Roselle, Ill./Lake Park) has produced massive throws all season, breaking the school record in the hammer throw this past weekend at the Illini Twilight by almost 11 feet with her moonshot of 57.22m/187-9. She leads the Horizon League by 25 feet in the event. She improved her second best shot put mark in school history in Champaign, Ill. by over ten inches with her toss of 13.53m/44-4.75, the second best mark in the Horizon League this season.

“It’s terrific and a neat opportunity for team to show off what we’ve been training for,” Drozdowski said. “I’m excited to throw in front of my fellow students and looking for big marks tomorrow.”

Seniors Jazmin Taylor (Rock Island, Ill./Rock Island) and Sarah Peters (LaGrange, Ill./Lyons Township) both hold top league marks in their respective events. Taylor holds the top mark in the high jump by one and three quarter inches (1.68m/5-6), while Peters, the defending pole vault champion, holds the top mark in the league by one and a quarter inches (3.48m/11-5).

Sophomore Liz Bloy (Freedom, Wis./Freedom) and freshman Hannah Reynard (Jackson, Mich./Napoleon) have both etched their names into the record books as well. At the Tennessee Relays, Bloy set the second fastest 3,000 meter steeplechase time in school history with her time of 11:03.56, her first collegiate steeplechase as well. Bloy would also set the second fastest school time in the 1,500m run at the Relays. Both her times rank second in the Horizon League this season.