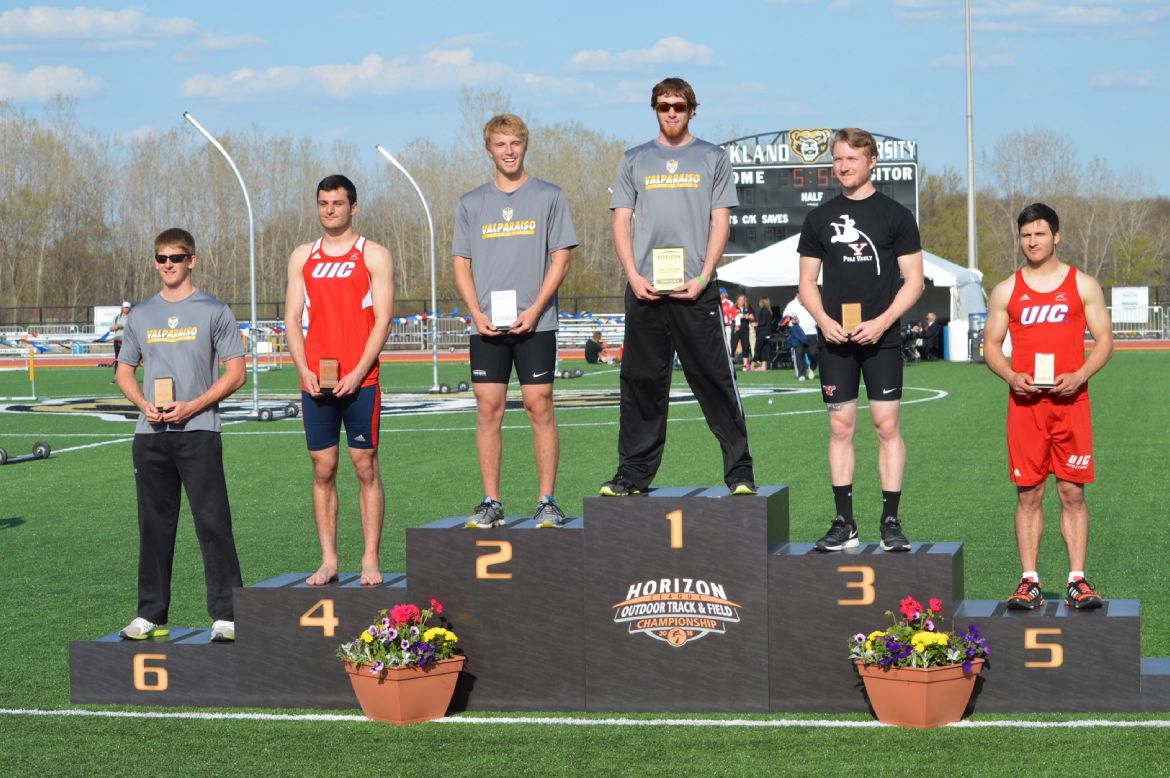 Justin Zosso and Alexander Watson finished one-two in the pole vault on Saturday at the Horizon League Championship.
Related Links

The Valparaiso men’s track and field team continued their strong performances on Saturday at the Horizon League Outdoor Championship in Oakland. The Crusaders stayed in second place with 58 points.

Sophomore Justin Zosso (Chesterton, Ind./Chesterton) and freshman Alexander Watson (Bolivar, Ohio/Tuscarawas Valley) finished one-two in the pole vault. Zosso successfully defended his title with a new personal and school record 4.96m/16-3.25, clearing it on his first attempt. He then attempted to break the league record of 5.00m/16-4.75 by going after 5.06m/16-7.25, but was unsuccessful. Watson improved his second best mark in school history by five and a half inches as he cleared 4.60m/15-1. Freshman Nicholas Stack (Hobart, Ind./Hobart) also scored by clearing a season best and fifth best mark in school history 4.30m/14-1.25 to take sixth.

“Justin and Alex looked great today,” head coach Ryan Moore said. “They got us some clutch points that we needed. After Justin got the win with his personal record, he took some stabs at the conference record and just the opportunity to go after the conference record is big. And Alex will clear higher too as he gets older. Both men are in search for big things.”

“Stellar performances today in the decathlon,” Moore said. “We knew we had something with Eli and Kevin did exceptionally well too. To score and get third is a solid accomplishment for Kevin. I want to thank these guys for their hard work. Those points are big for us. Those guys were warriors over the past two days.”

Freshman Brandon Riley (Chicago, Ill./Morgan Park) ran a personal best 49.97 in the 400m to get the fifth seed in Sunday’s finals.

“It’s anybody’s race tomorrow, Moore said. “He’ll be trying to get a point and run technically smart. Hopefully he’ll pick off a few people to score some points.”

“I thought we had a much better day today,” Moore added. “There were a lot of good performances today, but we got a little more work to do tomorrow.”

Day three of the Horizon League Outdoor Championship concludes the action tomorrow in Rochester. The high jump kicks off the field events at 9:00 am CT while the running events get started at 11:05 am with the 4x100m relay. Links to live results and video can be found on ValpoAthletics.com.