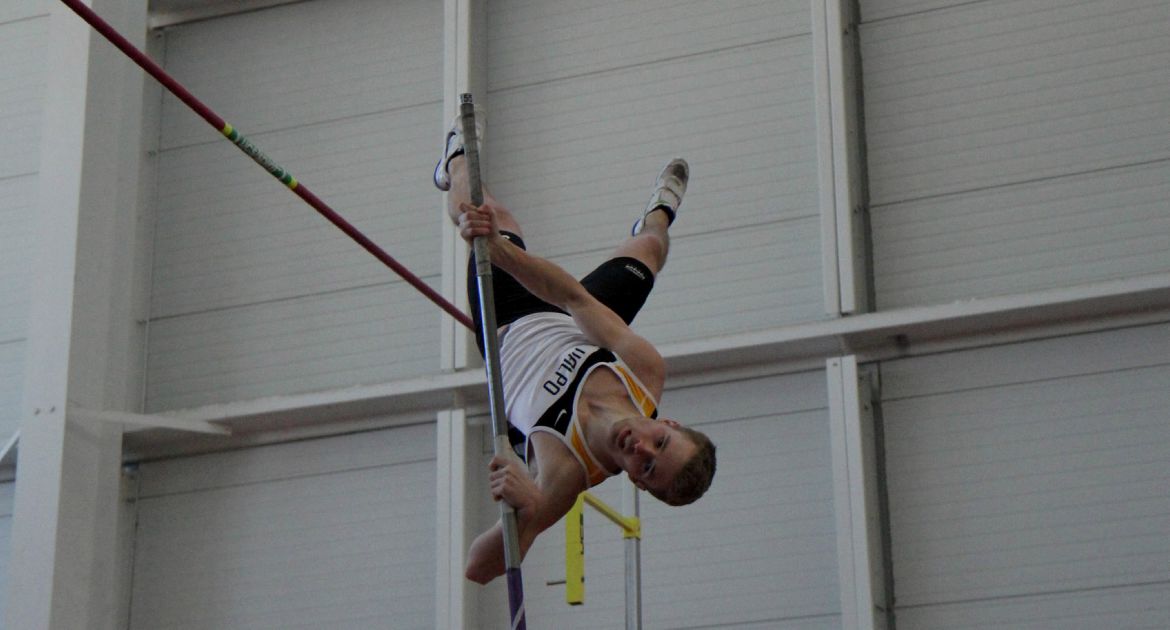 In what seemed like déjà vu from last year’s Crusader Open at the Warren G. Hoger Track, the Valparaiso University track and field squads battled wind, rain and frigid temperatures to put together some stellar performances in Saturday’s meet.

The Crusaders honored nine graduating seniors following the meet. On the men’s side, the Crusaders were the overall winners, topping the field of 11 teams with 143 points. The women’s team placed seventh overall with 48 points.

In the 100-meter dash, Alex Ruscitti sprinted his way across the finish line to earn first place with a time of 11.23 seconds. The 400-meter dash saw the Crusaders claim three top-seven finishes, including a third-place showing from Brandon Riley in 50.98 seconds and a fourth-place finish for Nathan Dotts in 51.80 seconds.

Continuing with the success in the sprints were Dotts and James Sampson in the 200m dash, as the duo placed fourth and fifth with times of 23.19 and 23.24 seconds, respectively. Aaron Clark Jr. in the 200-meter dash. Dotts placed 4th in 23.19, Sampson crossed at 23.24 for fifth, and Clark Jr. placed eighth at 23.65. The Crusader 4x400 meter relay team of Riley, Aaron Clark Jr., Joshua Yonker and Conner Hickey took home first place, crossing the line in 3:31.38.

The field events also brought success for the Crusader men on Saturday. Andrew McKissick finished in second place in the javelin throw with a toss of 145’2” as Valpo earned four of the top-six spots, while Johnathon Heagy matched the finish with a runner-up showing in the high jump, clearing 6’4 ¾”. Montell Hall leapt 41’8” in the triple jump to place third, while Alexander Watson cleared 15’1” in the pole vault for a third-place finish.

Jacob Smutz and Chris Sosnowski took first and second place in the discus throw, reaching distances of 143’10” and 143’8”, respectively. Sosnowski also brought in an event victory in the hammer throw with a mark of 166’1”.

The Crusader women also earned a trio of second-place finishes in the field events. Ann Chapman matched her PR and fourth-best leap in program history in the long jump with a mark of 17’0 ¾”, while Sarah Peters cleared 11’7 ¾” in the pole vault. Heather Mende tallied a second-place finish as well in the javelin throw with a toss of 108’8”.

A pair of Valpo runners traveled on Friday to the Hillsdale College Gina Relays to compete in the steeplechase. Liz Bloy set a new PR, less than four seconds off the Valpo program record, by winning her heat in 10:43.25 – best in the Horizon League this year and good for 56th in the region. On the men’s side, Ben Zibricky moved into fifth in the Horizon League with his time of 9:34.09.