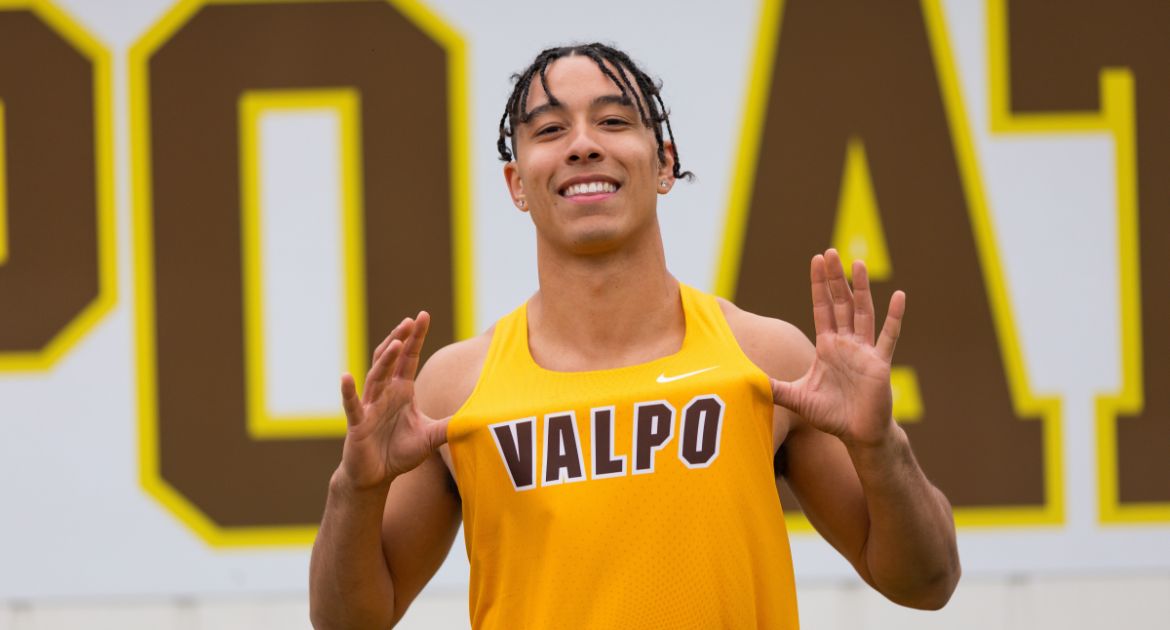 T.J. Weinzimmer figures to play a key role for Valpo in the jumps this season.

As the temperature drops and winter looms, the Valparaiso University track and field teams are warming up for another exciting season of competition.

After earning a seventh-place finish in the men’s discus at the 2018 MVC Outdoor Championships, Jake Rasawehr inched closer to Valpo’s all-time record in 2019. His throw of 167-5½ (51.04m) earned him a third-place finish, the highest individual finish of any Valpo track & field athlete in a conference championship since the program joined the MVC prior to the 2017-18 season. This year, Rasawehr — now a senior — will again look to top Steve Bartholomew’s program-best mark of 170-10 (52.07m) from 2008.

“We have some very nice returners in throws,” head coach Ryan Moore said. “Jake is coming off a third-place finish at the outdoor championships last year. He’s going to have the opportunity to win conference in discus this year, and he’s been coming around nicely in the weight throw in the last couple of weeks as well. We have a rising star in sophomore Eddie Juszczak (Lowell, Ind./ Lowell). He will contend for the school record before he’s done here, in my opinion. He should do well for us this year.”

For the women, juniors Lauren Mikolajczak (Bloomingdale, Ill./ Montini Catholic) and Hayley Krulik (Crown Point, Ind./ Crown Point) continue to lead the way. Mikolajczak, who is in the Physician’s Assistant program and likely will not compete next season, recorded the program’s fifth-best hammer throw in 2019— a distance of 151-2 (46.08m). Maria Greer (Chicago, Ill./ Williams Medical Prep) is the lone senior thrower.

“I’m viewing Lauren’s junior season as her if it is her senior season,” Moore said. “She has looked really good so far this fall. Krulik has really stepped up. She understands the role she plays as a leader on the women’s team.”

“Our underclassmen are still growing, so Taylor and Ben will lead the sprinters.” Moore said. “Bryce should be right up there with them too. Manny [Daggett], the older he gets, the more his body matures, and the faster and stronger he gets.”

In her first year since transferring from Carroll, Sierra Fischer (Brookfield, Wis./ Brookfield) had one of the most accomplished seasons in recent memory for a Valpo sprinter. As a junior, she became the first female athlete since Amanda Body in 2009 to enter the program’s Top 5 in two sprint events during the same season, doing so with the fifth-best time in both the 200 (25.99) and 400 (58.89).

“Sierra is positive all of the time, and that carries over to the rest of the team,” Moore said. “She’s a hard worker and great to be around. She’s got a lot of potential, and I think our new graduate assistant coach Brooke Krohley can be a benefit for her.”

All eyes will be on Alexander Bruno (Bloomington, Ill./ University) this season, as the redshirt senior wraps up a storybook career. Bruno is fresh off All-Conference honors at the MVC Cross Country Championships. In the 2017-2018 season alone, he added his name to Valpo’s record book an astounding five times, including the all-time record for the indoor mile (4:09.78) and running anchor on the program’s top distance medley time. Add in Top-3 times for the 800 (1:53.95) and 1,500 (3:52.11), as well as a Top-5 time in the 5,000 (14:55.28), and it is no surprise why Alexander Bruno is a name that will not soon be forgotten at Valpo.

“Bruno is coming off a solid cross country campaign,” Moore said. “Expectations for him are possibly to qualify for a national championship in the mile or possibly the 3K.”

“Ignacio and Jack train right alongside each other and push each other,” Moore said. “Hopefully they can bring that energy from cross country over to this season.”

Katherine Germann (Cincinnati, Ohio/ Finneytown) is also coming off a solid cross country campaign, and she will look to lead the women’s distance runners. Taylor Justison (Catham, Ill./ Glenwood) will also look for continued improvements in 2020.

“Katherine is really willing to put in a lot of work and effort to get better every day,” Moore said. “Coming from where she started to get the achievements she has now is just impressive, there’s no other way to put it. The work now will be focused on being able to finish the race as strong as she starts it. If she can, through the training, continue to withstand the rigors of the race, she can finish strong. Taylor is one of my favorite athletes to watch. I love her attitude and I’m looking forward to watching her compete.”

The jumpers on both the men’s and women’s sides will have to contend with significant loses from the season prior. T.J. Weinzimmer (Northbrook, Ill./ Glenbrook North) and Will Maidment (Woodstock, Ill./ Woodstock) will look to cover the ground left by the graduation of Malik Riley, who led the program in the long jump in 2018-19. Valpo will also be bolstered by the return of Collin McCullough.

Junior Shannon Lahey (Dixon, Ill./ Dixon) will lead the women in jumps, focusing on the long and triple jump events. Valpo must contend with the departures of Sydney Bronner—who set Top-3 marks in both the indoor and outdoor high jump in her only season on the team—and Anne Mou—who had the team’s best triple jump last year.

Moore is also planning on adding new athletes to the fold by way of recruiting.

“I’m excited about the direction our recruiting is coming along this year,” he said. “We are really looking to add some significant pieces.”

On beginning the program’s third season in the Missouri Valley Conference, Moore had this to say: “The conference keeps getting tougher and tougher, and that’s just the reality of it. You just have to lace up your shoes and get out there and compete.”

Valpo will begin the track and field season on Friday at Notre Dame’s Blue & Gold Invitational. The squad will face off against the hosts, Bethel University, Butler, DePaul, Detroit Mercy and Marquette. The meet will begin at 3 p.m. CT / 4 p.m. ET with the field events, followed by running events at 5 p.m. CT / 6 p.m. ET.