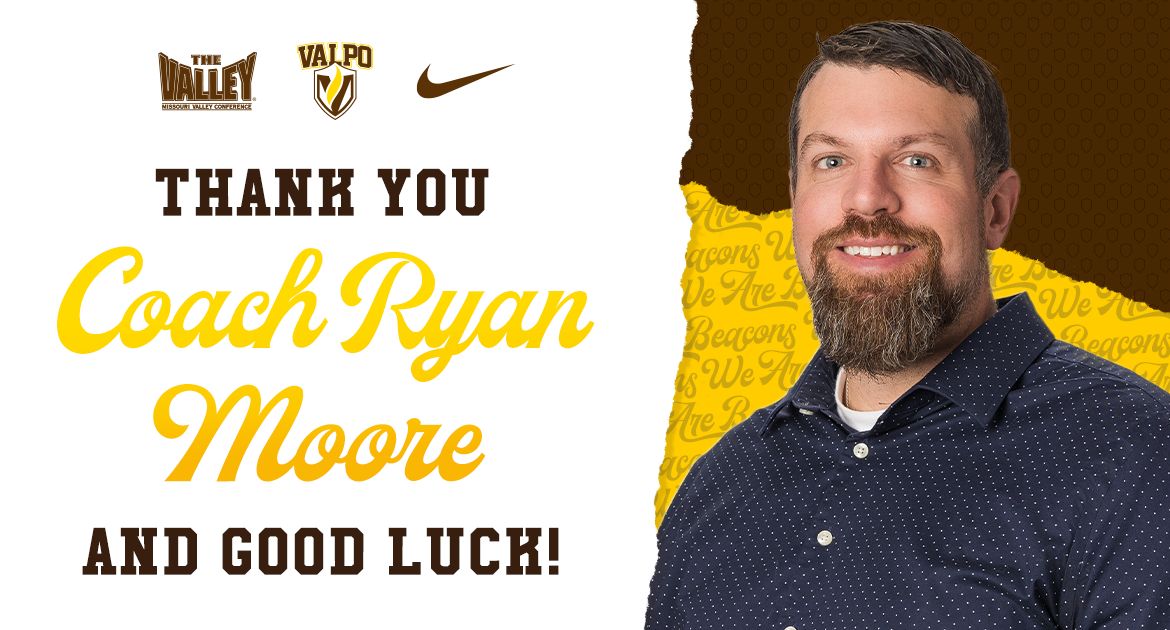 Ryan Moore has announced that he will step down as the head coach of the Valparaiso University men’s and women’s track & field programs to accept a position outside of coaching, effective on Friday, July 22.

Moore, who completed his 16th season as head coach in 2022, spent three years as an assistant coach working with the throwers before being promoted to the helm prior to the 2007 season. He cited the opportunity to spend more time with his family as the primary reason for his decision to step away from coaching and continue his professional career outside of collegiate athletics.

“It’s been a privilege to serve the University, Athletic Department and student-athletes for the last 19 years,” Moore said. “The time that I’ve gotten to spend with everyone at Valpo and especially the student-athletes is invaluable to me. Those are memories that I will take with me for the rest of my life. While I’m stepping down and retiring from coaching, that doesn’t mean I won’t remain a huge fan of this place. I plan on following and keeping in touch with as many people as possible because they’ve impacted my life immensely.”

During the 10 years Moore oversaw the program in the Horizon League, Valpo boasted 77 all-league honorees, including 41 event champions. On 16 occasions, Valpo student-athletes were named Most Outstanding Performers at the league championship meets while Valpo earned Horizon League Athlete of the Week honors 43 times. In addition, the program has been successful in the classroom, as 109 student-athletes earned academic All-Horizon League honors under Moore’s watch.

“I would like to thank Coach Moore for his dedication to Valpo student-athletes for the last 19 years,” Small said. “He has led our program through two conference transitions including the recent move to the Missouri Valley Conference, a highly-regarded track & field league. He has instructed All-Americans, national qualifiers and numerous all-conference selections. We are proud of our Valpo student-athletes’ commitment to flourishing and reaching their fullest potential.”

Moore led the program during its transition to the Missouri Valley Conference, a powerhouse league in track & field. Five of his student-athletes garnered all-MVC honors, 16 were named to the MVC Scholar-Athlete Team, one was named the MVC Scholar-Athlete of the Year and one earned CoSIDA Academic All-American honors. Most recently, Ignacio Veloz Bonilla represented the program with a third-place finish in the 1,500-meter run at the Puerto Rico National Championships.

Moore coached Laura Rolf, who became the second athlete in the history of the Valpo women’s program to earn NCAA All-American honors. She did so in the indoor one-mile run in 2007, qualifying for NCAA Nationals. Steve Bartholomew was a national qualifier in the indoor weight throw in 2008, and later in Moore’s time, Jacob Smutz reached U.S. Indoor Nationals in 2016 in the weight throw. During Moore’s head coaching tenure, Valpo boasted 11 NCAA Regional Qualifiers.

Walker was hired as the head coach of the Valpo men’s and women’s cross country programs and the distance coach for the track & field programs in April 2022. He made an immediate impact on the distance group during the 2022 track & field season. Walker’s first spring with the team culminated with Ignacio Veloz Bonilla placing third in the 1,500-meter run at the Puerto Rico National Championships.

“We’re excited to have Coach Walker expand his role as Interim Director of Track & Field and Cross Country,” Small said. “He has developed strong relationships with our student-athletes since joining the program this spring and will provide continuity and familiarity, creating a smooth transition. I am looking forward to Vincent executing his strategic vision of helping Valpo student-athletes excel in the Missouri Valley Conference while promoting holistic development.”

Prior to his arrival at Valpo, Walker gained experience in the Big Ten Conference at the University of Minnesota, where he had served as an assistant cross country and track & field coach since 2018. He began his coaching career in the Missouri Valley Conference, where he was part of the cross country and track & field staffs at his alma mater, Southern Illinois University, from 2016-2018.

“I am very excited about continuing to work with our distance athletes while having the opportunity to have a role in the other event groups and engage the rest of the team,” Walker said. “I’m excited to be an advocate for our student-athletes to compete at a high level within the Missouri Valley Conference. My experience at the University so far has been amazing. Everyone in the athletic department has been extremely welcoming as I adjusted to head cross country coach. We have a great support system that has helped me with the transition. It’s been a pleasure being here so far, and I’m excited to keep going and see what else we can accomplish with our track & field and cross country programs.”