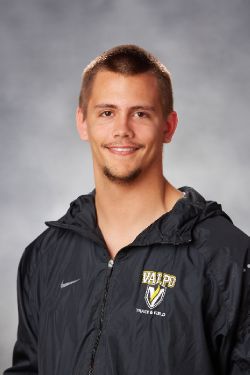 2013: Led the Crusaders in the weight throw (50'5 1/4") and ranked fourth in the shot put (41'4 1/2") during indoor season ... finished sixth in the weight and eighth in the shot at league indoor championship meet ... paced Valpo in the discus throw (154'11") - the third-best mark all-time at Valpo - and hammer throw (173'2") and ranked third in the shot put (39'10 3/4") during outdoor campaign ... claimed Horizon League championship outdoors in the discus throw at HL Outdoor Championships ... also finished fifth in the hammer throw.

Personal: Jacob is the son of Keith and Michelle Frey ... major is Civil Engineering ... born January 25.