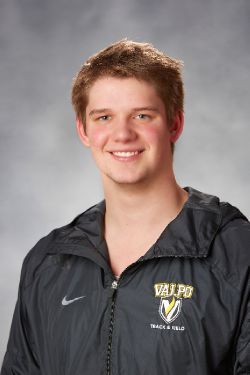 2014: Cleared 5'8" indoors in the high jump ... finished with second-best mark in javelin among Crusaders outdoors, posting a mark of 181'0" ... earned a podium finish in the event at the HL Outdoor Championships for a third straight season, finishing in third place ... member of HL Academic Honor Roll.

2013: Posted top mark indoors of 39'4 1/2" in the shot put ... set new school and Horizon League records outdoors in the javelin throw with a toss of 208'3" ... qualified for the NCAA East Regional Championships with that toss ... claimed the title in the javelin at the HL Outdoor Championships with a mark of 200'5", besting the previous league championship meet record by better than eight feet ... named to Academic All-Horizon League squad.

2012: Competed in the pole vault indoors, clearing 5'6" ... posted team's top mark outdoors in the javelin throw with a toss of 173'3" ... finished second at HL Outdoor Championships in the javelin.

Personal: Jeremy is the son of Jay and Dawn Getz … major is public relations … born March 2, 1993.