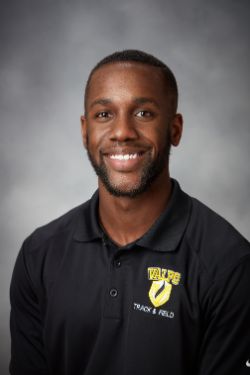 David Hicks Jr. (DJ) is in his third season as a member of the Crusader track and field coaching staff in 2017-18, working with sprints, hurdles and relays.

In his first year with the Crusaders, Hicks led the majority of his athletes to personal bests in their respective events. Additionally, the men’s program captured new school records in both the 4x100m and 4x400m relays.

A bachelor of science in kinesiology graduate of Houston Baptist University, Hicks was a sprinter on the men’s track and field team and also served as a team captain. Hicks currently holds the school record for the men’s indoor 400m. During his career, Hicks ran in multiple sprint events including the 100m, 200m, 400m, 4x100m and 4x400m.

A native of Missouri City, Texas, Hicks spent the summer of 2014 coaching the Afterburners TC as an assistant coach. In 2016, Hicks was invited to attend the Emerging Elite Coaches Camp in Chula Vista, California at the Team USA Training Center. He is a certified Sprints, Hurdles and Relays Specialist, and also a certified Strength and Conditioning Specialist through USTFCCCA. Furthermore, Hicks is a USATF Level 1 certified coach and holds his USTFCCCA Technical Certification. Hicks has worked with USATF biomechanist Mike Young and also participated in the 2014 NCAA Career in Sports forum.