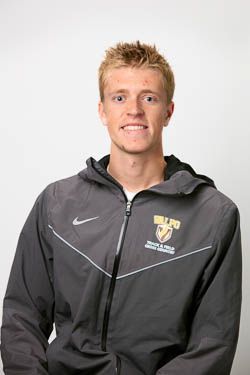 Prep (Athletic): Is a four-year varsity letter winner and was part of a team that got third and fourth at the Colorado state championships during his junior and senior year… Was an academic all-state first team honoree in addition to earning all-state honors as an athlete… During his prep days, also received four varsity letters in swimming and was a four-year state qualifier.

Prep (Academic/Extra Curricular): Volunteered at his church and served as a member of youth group while also participating in unified basketball… Four-time academic excellence award recipient… Member of National Honor Society… Ranked eighth in a graduating class of 366.

Personal: Lifelong Colorado resident… Majoring in environmental engineering… Enjoys being outdoors and helping others… Started swimming competitively at age 5 and began running track at age 6... Son of Ron and Amy Ehm and has one sibling – Inge.