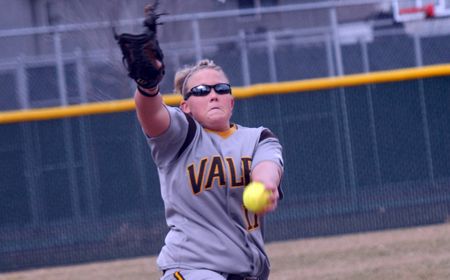 Behind a complete-game shutout with 13 strikeouts from Stephanie Kelly (Plainfield, Ill./Plainfield), the Valparaiso softball team earned a 4-0 victory in its opener at the Rebel Spring Games in Orlando, Fla. over St. Bonaventure on Wednesday.  In the nightcap, the Crusaders led before giving up five runs in the seventh inning, falling to Niagara 7-4.

The Crusaders earned all the offense they would need against the Bonnies in the opening inning.  Karen Korb (Indianapolis, Ind./Lutheran) led off the game with a single and stole second base.  Two batters later, Joylyn Ichiyama (Torrance, Calif./Redondo Union) hit a long fly to center field that Korb tagged up from second base and came all the way around to score on.  Jordan Rutkowski (Alden, N.Y./Alden) followed with a walk and steal of her own, and Whitney Warner (Greenwood, Ind./Center Grove) plated the freshman with an RBI single.

Valpo added two more insurance tallies in the seventh inning.  With one out, Korb singled and stole second, followed by an RBI single from Ashley Wolter (Denver, Iowa/Denver) to make it 3-0 Valpo.  Two batters later, Rutkowski came through with an RBI double for the game’s final run.

The rest of the game was all Kelly, as she set a new career high with her 13 K’s while scattering just four hits on the game to improve to 1-1.  St. Bonaventure’s best threat came in the sixth, when the Bonnies placed runners on second and third with one out, but Kelly got both Ashley and Amanda Kotz to strike out swinging to erase the threat.

“This was one of the best-pitched games of Steph’s career,” said Crusader head coach Randy Schneider.  “It was great to see her bounce back from a rough outing and pick up 13 strikeouts against a nice St. Bonaventure team.  We did some really nice things offensively as well, and played a solid defensive game also.  It was just a well-played all-around game.”

Valpo also got on top early in its matchup with Niagara, as Jacobson delivered a sacrifice fly to score Rutkowski in the bottom of the second.  The Purple Eagles pulled ahead with two runs in their half of the third, but the Crusaders responded with two of their own in the third, as Wolter drove in one and scored the other.

Ichiyama registered an RBI single of her own in the fifth inning to score Sara Strickland (Phoenix, Ariz./Horizon) and make it 4-2 Valpo going into the seventh.  But Niagara put up five runs in the seventh, taking advantage of three hits, two walks and a pair of Crusader errors to earn the victory.

“We played six great innings of softball, but the rough seventh inning cost us,” said Schneider.  “During the early-season games is the time to make mistakes and learn from them and hopefully continue to get better.  We’ve played 19 good innings out of 21 so far, but we just have to learn to close the door in the late innings with a lead.”

Jacobson got tagged with the loss in the circle, her first decision of the year, after going 6+ innings and allowing six runs, three of which were earned.  Michelle Krier earned the win for Niagara with six innings of five-hit softball, while Julie DiMatteo pitched a scoreless seventh for the save.

Korb registered two hits in the nightcap as well, giving her five hits on the day.  The Crusaders also stole four bases on five attempts against the Purple Eagles.

“Karen really had a stellar day for us, with five hits, four steals and three runs scored,” said Schneider.  “She has done a great job so far this year getting our offense going from the leadoff spot.”

Valparaiso (1-2) continues play at the Rebel Spring Games on Thursday with two more games.  The Crusaders will take on Holy Cross at 8 a.m. CST before facing Fairfield at 10 a.m.