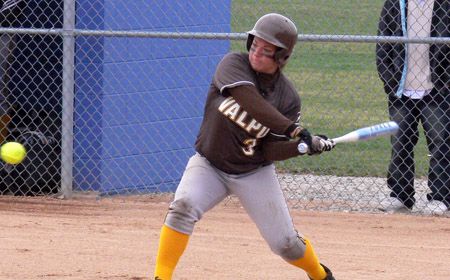 Valparaiso registered 14 stolen bases without getting caught once over its two games on Wednesday at the Rebel Spring Games in Orlando, Fla., leading to victories over Buffalo (4-1) and Robert Morris (9-3).

“I thought this was probably our best all-around day of softball so far,” said Crusader head coach Randy Schneider.  “We got two well-pitched games, played solid defense, hit the ball very well and were extremely aggressive on the basepaths.”

Steals played a large part in all four of Valpo’s runs in the opener against Buffalo.  The scoring started in the bottom of the third inning, when the Crusaders went ahead 3-0.  Jill Jacobson (Beecher, Ill./Beecher) led off with a single, proceeded to steal both second and third, and scored on an RBI single by Jamie Weinburger (Eagle River, Alaska/Eagle River).  Weinburger stole second and came home on a two-out double by Sara Strickland (Phoenix, Ariz./Horizon), who would eventually score on the front end of a double steal.

The Crusaders added an insurance run without the benefit of a hit in the sixth inning.  Kelsey Phalen (Batavia, Ill./Batavia) led off the frame with a walk, stole second base and went on to score on a pair of wild pitches.  Buffalo got a solo home run by Terese Diaz in the top of the seventh to close back within three runs, but would get no closer.

Alex Lagesse (Beecher, Ill./Beecher) continued the stellar start to her freshman campaign, improving to 3-0 with the complete-game five-hitter.  Lagesse has allowed just two earned runs over her four starts in the circle.  Sharon Barr took the loss for Buffalo, giving up three runs over 4.1 innings of work.  Weinburger led the Crusaders at the plate with hits in both of her at-bats, while five different players combined for six stolen bases.

“Alex pitched wonderfully today against Buffalo,” said Schneider.  “Other than one misstep in the final inning, she had a stellar outing, continuing her strong start to the season.  We also made some nice defensive plays behind her as well.”

The Crusaders hit the scoreboard first in the nightcap against Robert Morris as well.  Ashley Wolter (Denver, Iowa/Denver) led off the top of the second with a single, and two batters later crossed the plate when Sadie Conner (Washington, Ill./Washington) reached on a throwing error.  Conner would eventually come around to score as well on a Jacobson double.

Four more runs scored for Valpo with two outs in the third inning.  Strickland scored on an RBI single by Wolter, who proceeded to steal second.  Joylyn Ichiyama (Torrance, Calif./Redondo Union) reached when she got hit by the pitch, and the duo moved up on a passed ball.  Conner then reached via error, plating Wolter for the second time in the game.  Whitney Warner (Greenwood, Ind./Center Grove) recorded an RBI single to score Ichiyama, and following a pitching change, Jacobson came through with her second RBI two-bagger of the game, bringing Conner around to make it 6-0 Valpo.

The Crusaders would threaten to end the game early via run-rule in the sixth inning, scoring three more times.  Strickland led off the frame with a double and eventually scored on the front end of a double steal with Phalen, who came home on Wolter’s first home run of the season as Valpo went ahead 9-0.  The senior now has 14 career four-baggers, good for second-most in Crusader history.  Robert Morris scored three runs of its own in the bottom of the sixth to close the margin to six runs, but Sam McGee (Bloomington, Minn./Jefferson) pitched herself out of further trouble and then escaped a jam in the seventh to give Valpo the win.

McGee improved to 5-0 with the complete-game win, the fourth full outing of her young career, while Lindsey Moates took the loss for Robert Morris after allowing six runs in 2.2 innings.  Wolter went 3-for-4 with three runs scored and three RBIs offensively, while Strickland reached base in all five of her plate appearances and scored a pair of runs.  The Crusaders continued to run wild as well, matching what is believed to be a team single-game record with eight stolen bases, including three by Strickland.

“Sara had an unbelievable day for us,” said Schneider.  “She has been hitting well, advancing runners, and once she gets on the basepaths, she has been very aggressive in her running game.  Jill also stepped up in the second game, delivering some key hits early on to put up early runs.  That was the most important thing today was getting those key hits in important situations, which had been an issue at some times to this point of the season.  After a strong day today, we’re looking to continue playing well tomorrow and finishing our time down here on a high note.”

Valparaiso (10-5) will close out play at the Rebel Spring Games with games against Ivy League foes on Thursday.  The Crusaders take on Penn at 8 a.m. CST before facing Yale at noon.