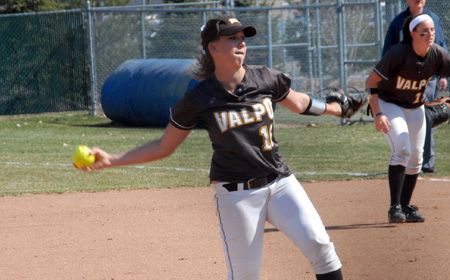 Freshman Sam McGee (Bloomington, Minn./Jefferson) dealt a five-hit shutout in the nightcap of a twinbill Saturday afternoon in Green Bay, Wis., as Valparaiso defeated the Phoenix, 3-0.  The Crusaders rallied from a five-run deficit in the opener before succumbing in nine innings, 6-5.

McGee scattered five hits and one walk while striking out six Phoenix batter, allowing just one Green Bay baserunner to get as far as third base.  She improved to 9-3 on her rookie season with her second career shutout.

Valpo got the only run it would need in the top of the third.  Jill Jacobson (Beecher, Ill./Beecher) and Karen Korb (Indianapolis, Ind./Lutheran) led off the inning with back-to-back singles.  While Jacobson would later be erased on a fielder’s choice, Korb advanced over to third base with one out and came home to score on the back end of an attempted double steal.

The Crusaders added an insurance tally in the fourth inning, as with one out, Whitney Warner (Greenwood, Ind./Center Grove) lined a single into left field.  Pinch-runner Lisa DeBruzzi (Carlisle, Mass./Concord-Carlisle) eventually crossed the plate on an RBI double by Joylyn Ichiyama (Torrance, Calif./Redondo Union).  DeBruzzi scored Valpo’s final run of the game as well, knocking a one-out single into left field in the sixth and coming around to score on an RBI single from Sadie Conner (Washington, Ill./Washington).

Valpo tallied 13 hits on the game, led by two apiece from Conner, Jacobson, Korb and Jordan Rutkowski (Alden, N.Y./Alden).  Amanda Margelofsky took the loss for Green Bay, falling to 8-7 after giving up three runs in her 5.2 innings of work.

“Sam pitched a really good game for us today,” said Crusader assistant coach Amy Wittgenstein.  “You’re always happy to go out on the road in league play and pick up a win, but we just need to get our bats going a little sooner tomorrow to come out with the series win.”

The Phoenix erupted offensively early in the opener, pushing across five runs on nine hits in the first three innings to put the Crusaders in an early hole.  Valpo started the slow crawl back in the fourth, as it loaded the bases with two outs for pitcher Alex Lagesse (Beecher, Ill./Beecher), who delivered a single through the left side to plate Ashley Wolter (Denver, Iowa/Denver) and KC Boldt (Red Wing, Minn./Red Wing) to cut the deficit to three runs.

Korb put one more run on the board in the fifth, leading off the frame with a solo home run to center, Valpo’s 23rd long ball of the season to set a new single-season program record.  The senior also delivered an RBI single in the sixth to score Lagesse, and the comeback was completed in the top of the seventh when Rutkowski led off with a solo blast to center field, tying the game at five.  Green Bay loaded the bases with two outs in the bottom half of the inning, but Wolter’s diving catch on a line drive preserved the tie and sent the game to extra innings.

Valpo’s best chance at scoring in extras came in the eighth, when Korb walked with two outs and stole second, but a groundout ended the threat.  The Phoenix eventually won the game in the bottom of the ninth, getting a leadoff double from pinch-hitter Samantha Howe followed by an RBI single from Melani Niederer.

“Sadie really swung the bat well today, and it was good to see Karen hit well also, turning and driving the ball,” said Wittgenstein.  “You have to give Green Bay credit, they came out early on and hitting the holes in our defense and taking advantage.”

Valparaiso (23-17, 8-6 Horizon) is scheduled to conclude its three-game series with Green Bay on Sunday afternoon at noon.  Live stats will be available at www.valpoathletics.com.