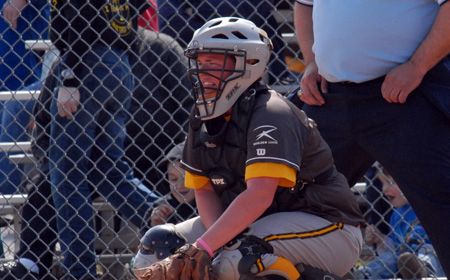 Valparaiso led 4-1 entering the seventh inning of Thursday’s first round game at the Horizon League Championships in Pendleton, Ind., but Green Bay struck for six runs in the top of the inning to earn a 7-4 victory.

Valpo got on the board first, striking in the bottom half of the opening inning.  Karen Korb (Indianapolis, Ind./Lutheran) led off the frame with a single up the middle and proceeded to steal second.  The senior then moved over to third on a groundout by Sara Strickland (Phoenix, Ariz./Horizon) and scored on a successful squeeze bunt from Ashley Wolter (Denver, Iowa/Denver).

Korb crossed the plate with Valpo’s second run of the game as well, leading off the bottom of the third with a fly ball to the right-center gap that was dropped by the Phoenix right fielder, allowing Korb to get all the way to third.  Strickland followed with an RBI groundout to give the Crusaders a two-run lead.

Green Bay got back to within one in the top of the fourth, as Missy Schleicher led off the inning with a solo homer to left-center field.  But the Crusaders responded in the exact same fashion in the bottom half of the frame, as Joylyn Ichiyama (Torrance, Calif./Redondo Union) laced a hard line drive to left-center that cleared the fence in a hurry, pushing the lead back to two runs.

Sadie Conner (Washington, Ill./Washington) added a key insurance run for Valpo in the bottom of the sixth, launching a two-strike solo home run of her own to left-center.  But the Phoenix put together the big inning to earn the win in the seventh, stringing together four straight singles to score its first two runs.  The tying run came on a sacrifice fly by Alli Rivera, while a passed ball allowed Katie Cooney to score the eventual game-winning tally.  Green Bay added two more runs on a Crusader error to close out the scoring.

Amanda Margelofsky earned the victory for Green Bay (19-23) after coming in to get the final two outs of the sixth inning.  Cooney, who started the game in the circle, re-entered and pitched a hitless seventh for her third save.  Stephanie Kelly (Plainfield, Ill./Plainfield) took the loss for Valpo, falling to 8-9 after giving up six runs, only three of which were earned, in 3.2 innings of work.

Valparaiso (24-23) falls into the loser’s bracket of the double-elimination tournament, where it will face the loser of today’s game between fifth-seeded Butler and eighth-seeded Youngstown State.  Game time is set for 8 a.m. CDT.