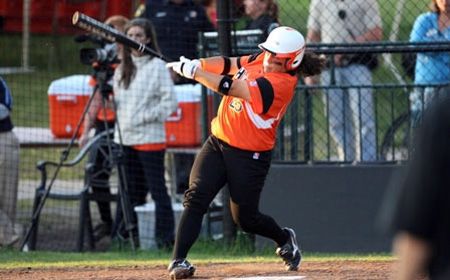 Folden was the seventh overall draft pick in the 2008 NPF Draft by the Chicago Bandits and made an immediate impact in her first season, helping the Bandits win the NPF Championship.  The catcher earned Rookie of the Year honors after hitting .311 with 11 home runs and 32 RBIs, all three of which ranked among the league’s top-six performers.  In the recently concluded 2009 campaign, Folden had another stellar year, hitting .308 with six homers and 22 RBIs, all ranking among the league’s top-eight.

Folden also brings coaching experience with her, most recently having spent the 2009 season working as the hitting coach and pitching/catching coach for Holy Names University, an NAIA school in California.  She helped raise the team’s batting average 64 points and lowered the team ERA by nearly half as the Hawks captured the California Pacific Conference championship in just their second year of existence.

Prior to arriving at HNU, Folden spent the fall of 2008 completing her bachelor’s degree in history at Marshall while also serving as a student assistant for the Thundering Herd.  She previously spent four years on the Marshall softball team, earning NFCA All-American honors all four seasons while twice being named Conference USA Player of the Year.