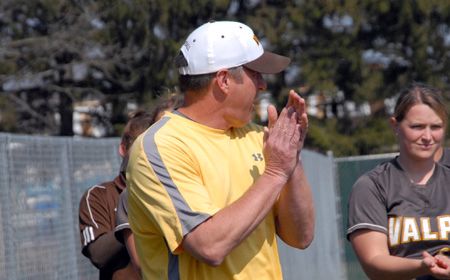 "With only two seniors graduating in 2010, and the return of the nucleus of this program through 2012, we wanted to make sure we recruited two people that were grounded in their values, leaders in their respective schools and have the ability to make us better,” said Schneider.  “We got what we were looking for.  Amanda and Angela bring a maturity that will fit in well with our 2011 team.”

Doerffler, a shortstop out of Concordia Lutheran H.S. in Fort Wayne, Ind., is a four-year letterwinner on the softball field for the Cadets.  A three-time All-Conference and two-time All-Area selection, Doerffler holds a .424 career batting average.  The younger sister of former Crusader football player Ryan, she has earned Academic All-State honors twice and has also stood out in other seasons, receiving three All-Conference accolades in soccer and two All-Conference selections in basketball.

“Angie is known for being a great leader, a great athlete, and a great student in northeast Indiana,” said Schneider.  “Angie can play anywhere in the infield or outfield, and you’re going to get a competitor that is out there to win a championship.”

Korb, an infielder/outfielder out of Lutheran H.S. in Indianapolis, Ind., is a four-year starting shortstop for the Saints.  The younger sister of former Crusader softball standout Karen, Korb has hit above .400 for her prep career as the Saints have advanced deep into the state tournament each of the last three years.  A three-year team captain, she has made numerous central Indiana and state All-Star squads, and has also hit above .400 each of the last three years playing 18U travel softball.  Also a versatile athlete, Korb has been a Second Team All-State honoree on the volleyball court while starting each of the last four years, while also playing as a four-year starter for Lutheran’s basketball team.  She will graduate as the first female athlete in school history to earn 12 varsity letters.

“Amanda was thrust into a leadership role early on in high school and experienced a great deal of success,” said Schneider.  “She is a fine athlete, a young lady that you can move anywhere on the field, knowing that you will get a player that will give you 100% on and off the field.”

“Both Amanda and Angie are great athletes who are versatile enough that they could have been recruited to play most any sport at Valpo,” concluded Schneider.  “Today is a great day for our program’s future because we’re adding the two of them.  We'll be reading a great deal about these two women in the future and are proud that they chose us as their university/softball program!”