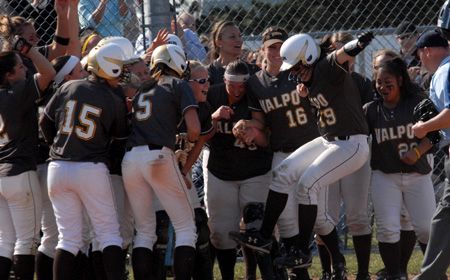 The season begins the weekend of Feb. 12-14 at the Ramada UNI-Dome Classic, where Valpo will face Dayton, North Dakota, and Green Bay (non-league matchup) in addition to the host Panthers.  The tournament will mark the earliest start to a Crusader softball season in program history.

“We’re playing a bit earlier this year, which we’re hoping helps to break up our preseason training,” said Schneider.  “UNI always puts on a good early-season tournament, and it should be a good experience for us playing over there.”

The Crusaders then hit the road for a massive trip, playing 19 games in a 16-day span.  The journey kicks off Feb. 27 at Tennessee State’s Tiger Spring Classic, also featuring Alabama A&M and Indiana State.  Valpo will then play two games apiece at the Rebel Spring Games in Orlando, Fla. against Holy Cross and Dayton before traveling to Auburn’s War Eagle Classic, where it will play Gardner-Webb, Tennessee State and Alabama in addition to the host Tigers.State

From there, Valpo heads to Huntington, W.V. for a doubleheader March 9 at Marshall, alma mater of Crusader assistant coach Rachel Folden.  The trip concludes at Kansas’ KU Invitational, where the Crusaders will face off against the host Jayhawks three times and play versus Missouri State twice.

“Our spring trip is certainly going to be challenging for us this year because of the amount of travel involved,” said Schneider.  “But it will be a good team-building experience for us with a number of quality games against good competition, in particular getting to play at a pair of big schools in Auburn and Kansas.”

The home slate at the Valparaiso University Softball Field kicks off March 17 with a non-league doubleheader against Western Illinois.  The Crusaders are also slated to play home twinbills against Northern Illinois and IUPUI outside of league play, while traveling to IPFW for a doubleheader and Purdue for a single game.

The Horizon League schedule begins with a three-game series against Green Bay at home, with two games March 27 and a single contest March 28.  Valpo will play three-game series against each of the other eight league schools, also hosting Butler, Loyola and Youngstown State while hitting the road to play Detroit, UIC, Wright State and Cleveland State.  The top six finishers in the league regular season standings will advance to the Horizon League Championship, to be contested May 13-15 at the regular season champion.  The tournament champion will earn the league’s automatic berth into the NCAA Tournament.