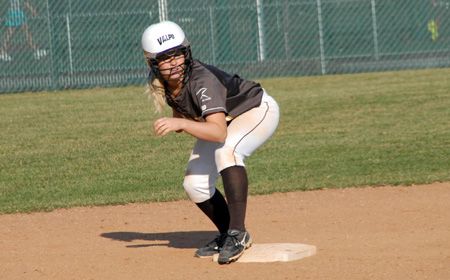 2009 Horizon League Newcomer of the Year Sara Strickland and the Crusaders kick off the 2010 season in just over two weeks. (Ray Acevedo)

The Valparaiso University softball team has been picked to finish in sixth place in the Horizon League standings for the 2010 season in preseason polling by the league’s head coaches.

Head coach Randy Schneider returns 14 letterwinners from his 2009 squad, nine of whom hit at least .284 last year, which finished third nationally with 2.67 stolen bases/game and 14th nationally with a .312 team batting average.  In addition, Schneider has brought in five newcomers for the 2010 campaign.

Valparaiso received 37 points in the polling, which awarded eight points for a first-place vote.  Cleveland State was tabbed as the preseason favorite with seven first-place votes and 63 points, while UIC and Wright State each picked up a first-place vote en route to 57 and 46 points, respectively. Butler and Loyola tied for fourth, edging out the Crusaders with 38 points apiece, while Green Bay (22), Youngstown State (15) and Detroit (8) rounded out the polling.

The Crusaders kick off the 2010 campaign on Saturday, February 13 at the Ramada UNI-Dome Classic, playing four games over their two days at the tournament.