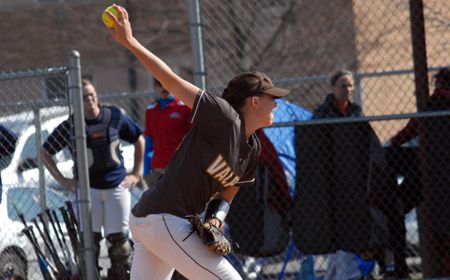 The Valparaiso softball team opened its 2010 campaign on Saturday, the earliest it has ever began a season, with a split at the Ramada UNI Dome Classic in Cedar Falls, Iowa.  The Crusaders began the day with a 7-2 loss to the host Panthers, but rebounded in the nightcap with a 4-3 victory over South Dakota.

The Crusaders opened the nightcap against the Coyotes with two runs in the bottom of the first inning.  Sophomore Sara Strickland (Phoenix, Ariz./Horizon) led off the game with a walk, and with two outs, cleanup hitter Sadie Conner (Washington, Ill./Washington) launched a home run to give Valpo a quick 2-0 lead.

The Crusaders would maintain the 4-0 lead until the fifth inning, when pitcher Sam McGee (Bloomington, Minn./Jefferson) loaded the bases on a walk and two hit batsmen and South Dakota’s Michelle Jones took advantage, clearing the bases with a three-run triple to cut the Valpo edge to one run.  McGee stepped up though, registering a strikeout to end the Coyote threat as the Crusaders set down the final seven batters in order in the win.

Jones’ triple was the only hit Crusader pitchers gave up to South Dakota, as McGee (1-0) earned the win with six innings of one-hit softball, striking out six batters.  Sophomore Shaleigh Jansen (Ottawa, Ill./Ottawa Township) earned her first career save after entering in the seventh inning and retiring the side in order.  Offensively, Lagesse tallied two hits to lead Valpo against USD.  South Dakota’s Mel Johnson (0-1) took the complete-game loss.

“Sam really pitched one heck of a game,” said Crusader head coach Randy Schneider.  “She struggled a bit in the fifth, loading the bases and giving up a big hit, but bounced back to get out of the inning.  I really liked the way Shaleigh came into the game for the seventh and just shut the door on South Dakota.”

In the opener, host UNI would get all the runs it would need in the third inning, pushing three tallies across the plate.  The Panthers added two runs apiece in the fifth and sixth innings.  Valpo registered both its runs in the top of the sixth as Phalen registered a 2-RBI double to plate Bridwell and Jill Jacobson (Beecher, Ill./Beecher).

Lagesse (0-1) took the loss for the Crusaders, giving up ten hits and seven runs (five earned) in 5.1 innings of work.  Jen Larsen (1-0) earned the complete-game victory for the Panthers.  Bridwell tallied two hits against UNI to lead the Crusader offense.

“It was a new experience for us playing in the dome that first game,” said Schneider.  “With it not being all fenced in, there’s different ground rules about the ball going out of play, and we gave up a couple runs in those cases.  We also gave up a couple other runs on wild pitches and passed balls, as well as an illegal pitch, just runs that if you take away the mistakes, we’re sitting in a pretty close game.”

“Alex pitched a good game overall,” continued Schneider.  “She did a good job pitching for ground balls, but it’s tough for any pitcher to be pitching from behind all the time.  Our offense just struggled to hit early.”

Valparaiso (1-1) closes out play at UNI on Sunday with two more games.  The Crusaders face off against Dayton at 8 a.m. before closing tournament action against North Dakota at noon.

“We were happy to get the win against South Dakota, just to get into the win column,” concluded Schneider.  “It was a good day for our team to come out 1-1, especially with a shorthanded lineup without Jordan [Rutkowski] and Joylyn [Ichiyama].  I really think we’re starting to get on track and will hit the ball better tomorrow.”