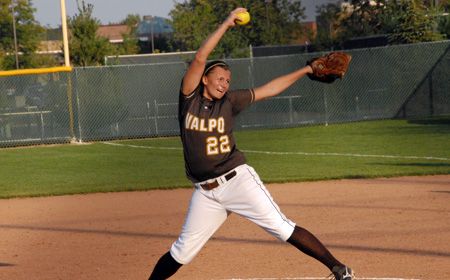 Shaleigh Jansen was named the Horizon League Pitcher of the Week. (Ray Acevedo)

Valparaiso sophomore infielder Kelsey Phalen (Batavia, Ill./Batavia) was named the Horizon League Player of the Week, while sophomore pitcher Shaleigh Jansen (Ottawa, Ill./Ottawa Township) earned Pitcher of the Week accolades as the league announced its weekly awards today.  It is the first career weekly honor for both players.

Phalen, returning after suffering a season-ending injury midway through her freshman campaign, tallied hits in all four games, including two multi-hit games, and hit .500 (6-for-12) for the weekend.  The sophomore picked up seven RBIs, driving in two runs in three of the four games, and also tallied three doubles.  She drove in the game-winning run in the Crusader victory over South Dakota and scored the game-winning tally against Dayton.

Jansen appeared in three games last weekend for Valpo, starting once and making two relief appearances.  The sophomore posted a 0.81 ERA over 8.2 innings of work and struck out ten batters while walking just two.  She earned a complete-game victory over Dayton, giving up just one earned run and four hits, and also picked up a save against South Dakota, pitching a perfect seventh inning in a one-run ballgame.

The duo’s performances helped Valparaiso open the season with a 3-1 mark at the UNI Dome Classic.  With the weekly honor, Phalen and Jansen are now both eligible for the Horizon League Network’s ‘The People’s Choice’ honor.  Fans can vote for either Phalen or Jansen by visiting www.horizonleaguenetwork.tv and voting in ‘The People’s Choice’ poll on the right-hand side of the page thru Tuesday afternoon.