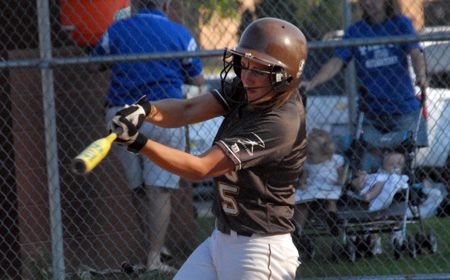 Trailing by two runs and down to its final out against host Tennessee State Saturday afternoon at the Tiger Softball Classic in Nashville, Tenn., Valparaiso rallied for three runs to earn a 4-3 victory over the Tigers.  The Crusaders dropped their opener Saturday morning to Indiana State, 6-3.

Down 3-1 entering the seventh inning, the Crusaders got back-to-back singles by Kelsey Phalen (Batavia, Ill./Batavia) and Jordan Rutkowski (Alden, N.Y./Alden) to put the tying run on base with nobody out.  Two straight outs left freshman Jessie Marinec (Alsip, Ill./Marist) Valpo’s last hope to keep the game alive, and the rookie came through with a single that plated Phalen to pull back to within one run.

Rutkowski and Marinec then successfully pulled off a double steal to push the potential go-ahead run into scoring position, and Jill Jacobson (Beecher, Ill./Beecher) provided the critical blow, roping a triple down the left field line to score both runners and put the Crusaders in the lead.  Shaleigh Jansen (Ottawa, Ill./Ottawa Township) took care of putting the game away for the Crusaders, pitching around a one-out single to keep the Tigers off the scoreboard in the bottom of the seventh, earning her second save of the year.

“I’m proud of the way we toughed it out in the second game, despite being a little beat up right now with injuries and illness,” said Crusader head coach Randy Schneider.  “It was a great win for us, coming from behind with some players out of position, and it was exactly what we needed to end the day.”

Tennessee State (1-6) scored single runs in the second and third innings to jump out to a 2-0 lead, but Valpo got a tally back in the fourth.  Sara Strickland (Phoenix, Ariz./Horizon) led off the frame with a single, stole second and came around to score on an RBI single by Rutkowski.  The Tigers added another run in the sixth to set up the Crusaders’ final inning heroics.

Redshirt freshman Amanda Bolton (Phoenix, Ariz./Horizon [Arizona]) earned her first collegiate victory on Saturday, registering the last two outs of the sixth in relief to move to 1-0 on the year.  The Tigers’ Caitlin Eaton took the complete game loss, falling to 0-1, while Sam McGee (Bloomington, Minn./Jefferson) started the game in the circle for Valpo and pitched 5.1 innings, giving up just two earned runs.  Rutkowski paced the Crusader offense with a perfect 3-for-3 effort against TSU.

Indiana State (2-3) scored all the runs it would need in the first two innings of the tournament opener, putting up one in the first and three in the second.  Rutkowski scored a run in the first for the Crusaders after connecting for a two-out double, while Phalen and Strickland both crossed the plate in the third.

Valpo tallied nine hits against the Sycamores, led by two apiece by Hayley Bridwell (Lemont, Ill./Lemont) and Joylyn Ichiyama (Torrance, Calif./Redondo Union), but left ten runners on base for the game.  Jansen took the loss after starting in the circle, going 1+ innings and giving up three earned runs, falling to 1-1 on the year.  Meagan McCurdy improved to 2-1 on the year for ISU with the complete-game victory.

“Indiana State was our first time outdoors this spring, and I think it took us some time to adjust to the difference compared to being indoors,” said Schneider.  “We had some misplays that led to their runs, which ultimately cost us the game.  I was excited to see our offense reach as often as they did against a good pitcher in McCurdy, but we had our opportunities to win the game and didn’t capitalize.”

Valparaiso (4-2) concludes tournament play Sunday with two more games.  The Crusaders open the day at 8:30 a.m. CST against Indiana State, and turn right around to face Alabama A&M at 10:45 a.m.