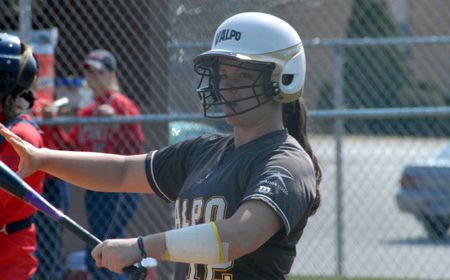 Alabama A&M struck first in the nightcap with a run in the top of the first, but Strickland singled to lead off the bottom of the first and eventually came around to score the tying run.  Valpo then plated five runs in the second, highlighted by a 2-RBI double from Rutkowski, to pull away from the Bulldogs, and then added one in the third and seven in the fourth for the game’s final margin, as the game was shortened to four and a half innings due to run rule.

Sam McGee (Bloomington, Minn./Jefferson) threw a complete-game three-hitter, giving up just the unearned run in the first to improve to 2-0 this year.  Janice Aleman took the loss for Alabama A&M (2-5), falling to 1-2.  Strickland went 3-for-3 with three runs scored and two RBIs for the Crusaders, while Hermanson, Jill Jacobson (Beecher, Ill./Beecher) and Kelsey Phalen (Batavia, Ill./Batavia) all also posted multi-hit games.  Rutkowski drove in three runs in the winning effort as well.

The opener did not go as well for the Crusaders, as they committed six errors in the run rule shortened game.  Indiana State (4-3) jumped out to a 9-0 lead after three innings, but the Valpo offense opened up in the final two frames, as Hermanson and fellow freshman Tori Brown (Harrison, Ohio/Harrison) each posted 2-RBI doubles in the Crusaders’ four-run fourth inning.

Shaleigh Jansen (Ottawa, Ill./Ottawa Township) fell to 1-2 on the year after taking the loss in the circle, giving up nine runs in 2.2 innings of work, only three of which were earned.  Kristen Felker moved to 2-1 this year with the win for Indiana State.  Rutkowski went 2-for-2 with two runs scored to lead Valpo against the Sycamores.

“Today was not the best day for us,” said Crusader head coach Randy Schneider.  “We made way too many mistakes in the field against Indiana State, but I give our players credit for bouncing back to beat Alabama A&M handily.  I’m happy with the way our offense is hitting the ball right now, and I feel good about where our pitching is at as well.  We just need to shore up our fielding to help us get to where we want to go.”

Over the course of the tournament’s two days, the Crusader trio on the All-Tournament Team all stood out at the plate.  Hermanson hit .400 for Valpo with four RBIs, two runs scored and two doubles.  Strickland stole four bases and hit.462, scoring five runs as well.  Rutkowski led the way for the Crusader offense, going 7-for-13 (.538) with five runs scored, four RBIs and three doubles.

Valparaiso (5-3) takes a day off Monday before moving on to two days of competition at the Rebel Spring Games in Orlando, Fla.  The Crusaders face Dayton (2 p.m. CST) and Holy Cross (4 p.m.) on Tuesday afternoon.