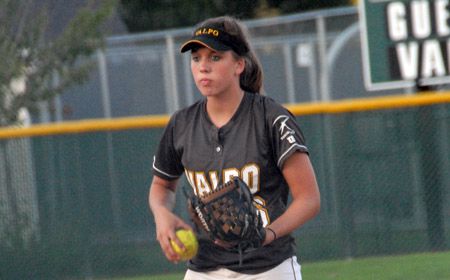 Sophomore Sam McGee (Bloomington, Minn./Jefferson) tossed six three-hit shutout innings in Valpo’s victory over Dayton, while junior Jill Jacobson (Beecher, Ill./Beecher) made her first appearance of the season in the circle to close out the win over the Flyers, giving up just the one unearned tally.  In the nightcap, sophomore Shaleigh Jansen (Ottawa, Ill./Ottawa Township) allowed just four hits while throwing six shutout innings against Holy Cross and redshirt freshman Amanda Bolton (Phoenix, Ariz./Horizon [Arizona]) ended the game with a scoreless seventh in the circle.

The Crusaders got all their offense against Dayton in the early innings.  Freshman Jessie Marinec (Alsip, Ill./Marist) led off the second frame with a solo homer, the first of her career.  In the third inning, sophomore Jordan Rutkowski (Alden, N.Y./Alden) came home on the back end of a double steal for the eventual game-winning run.  Sophomore Kelsey Phalen (Batavia, Ill./Batavia) scored an insurance tally on a sacrifice fly by sophomore Joylyn Ichiyama (Torrance, Calif./Redondo Union), while Marinec was plated later in the frame by a Sadie Conner (Washington, Ill./Washington) double.

Marinec ended the game against the Flyers 2-for-3 with two runs scored, the only Crusader batter to have a multi-hit game.  McGee improved to 3-0 in the circle with the win, while Sarah Wedel took the loss for Dayton (2-7), falling to 1-2 on the year.

Valpo scored the only run it would need against Holy Cross before an out was even recorded, as freshman Hayley Bridwell (Lemont, Ill./Lemont) crossed the plate on an error following a Rutkowski single.  Three more runs would score in the inning, including a two-run homer by Ichiyama.  The Crusaders added a pair of runs apiece in the sixth and seventh frames, the latter coming on a two-run bomb by Jacobson.

Bridwell and Jacobson each posted two hits in the nightcap, with the former scoring a pair of runs as well.  Ichiyama, Jacobson and Phalen all drove in two runs apiece in the winning effort.  Jansen moved to 2-2 on the season with the win, while Amanda Audette fell to 1-1 with the loss for Holy Cross (1-3).

Valparaiso (7-3) closes out action at the Rebel Spring Games on Wednesday with two more games.  The Crusaders take on Saint Francis (Pa.) at noon CST before facing off again with Holy Cross at 2 p.m.