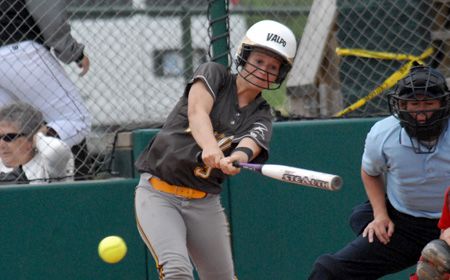 Sara Strickland drove in the go-ahead run in the ninth, one of her three RBIs. (Ray Acevedo)
Valparaiso at Gardner-Webb | March 05, 2010
Related Links
Related Links

Valparaiso’s offense, held in check over the first half of Friday night’s game, exploded to overcome a five-run deficit in an 8-6 nine-inning victory over Gardner-Webb at the War Eagle Classic in Auburn, Ala.  The win is Valpo’s sixth straight and improves the Crusaders’ record to 10-3, the best start in school history.

“This might have been one of the best comeback wins we’ve had in my time here,” said Crusader head coach Randy Schneider.  “Alex really pitched a heck of a game for us, and our offense came back and got key hits when we needed them.”

The Bulldogs struck immediately in a five-run first inning, getting a pair of home runs to score the handful of runs on only three hits.  The Crusader offense, meanwhile, found itself held without a hit until the fourth inning and only put three runners on base in the first four frames.

But the top of the fifth inning brought a reversal of fortune for the Valpo attack at the plate.  Sadie Conner (Washington, Ill./Washington) got the Crusaders started with a double and immediately scored on a single by Lisa DeBruzzi (Carlisle, Mass./Concord-Carlisle).  Three batters later, both DeBruzzi and Jill Jacobson (Beecher, Ill./Beecher) were plated on a Sara Strickland (Phoenix, Ariz./Horizon) double.  The sophomore would come around to cut the deficit to one run on a sacrifice fly by Kelsey Phalen (Batavia, Ill./Batavia).

Jacobson came up with the big hit one inning later to tie things up, as the junior’s RBI single scored pinch-runner Tori Brown (Harrison, Ohio/Harrison) to tie the game at 5-5.  Neither team was able to score in the seventh inning, and despite both teams getting a runner on second to start extra innings thanks to the International Tiebreaker, neither squad plated a run in the eighth either.

With Jacobson on second base to start the top of the ninth, Valpo broke through to take the lead for the first time.  Hayley Bridwell (Lemont, Ill./Lemont) sacrificed Jacobson over to third, and Strickland followed with a sacrifice fly to bring home the go-ahead run.  Jordan Rutkowski (Alden, N.Y./Alden) kept the inning alive with a single, and Phalen connected on a two-run homer to center to extend the lead to three runs.  Gardner-Webb (7-7) scored its runner on second on a pair of groundouts, but that was the only run the Bulldogs scored as the Crusaders closed out the win.

“We changed our approach at the plate tonight after a few innings, and I really think it paid off offensively,” said Schneide “Sara really stepped up in that ninth inning, getting the ball into the air in the outfield for the sac fly, and then to see Kelsey step up and hit the two-run homer was pretty cool.”

Shaleigh Jansen (Ottawa, Ill./Ottawa Township) earned the start in the circle for Valpo and fought her way through the rough first inning, eventually going 2-plus innings.  Alex Lagesse (Beecher, Ill./Beecher) came into the game in relief and pitched a gem, tossing seven innings of one-hit ball and giving up just the International Tiebreak run in the ninth, an unearned tally, to improve to 3-1.  The Bulldogs’ Christine Murray took the loss in relief, giving up the three runs in the ninth to fall to 3-4.

“Alex came in and got the job done,” said Schneider.  “She held Gardner-Webb in check the entire night, just an incredible pitching performance against a good-hitting team with some very nice hitters.  She was in control the whole game.  Our defense has to get a lot of credit as well, they made some nice plays to get us out of jams.”

The Crusader offense ended the night with 11 hits, its third straight game reaching double figures in the hit category.  Rutkowski led the way with a 3-for-4 effort, extending her season-opening hitting streak to ten games while also lengthening her run-scoring streak to ten games.  Jacobson and Phalen each had multi-hit games as well, while Phalen and Strickland both finished with three RBIs on the night.

Valparaiso (10-3) looks for another win on Saturday at the War Eagle Classic, as the Crusaders face Tennessee State at 12:30 p.m.  Live stats for the game will be available through www.valpoathletics.com.