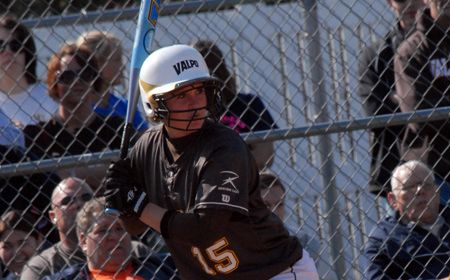 Valparaiso extended its winning streak to eight games Sunday with a 5-0 victory over Alabama State before falling to host Auburn in extra innings, 6-3, as it closed out play at the War Eagle Classic in Auburn, Ala.

Valpo got the only runs it would need against Alabama State in the opener in the second inning.  Freshman Jessie Marinec (Alsip, Ill./Marist) delivered an RBI double to score sophomore Joylyn Ichiyama (Torrance, Calif./Redondo Union) with what would be the game-winning RBI.  Freshman Tori Brown (Harrison, Ohio/Harrison) and junior Jill Jacobson (Beecher, Ill./Beecher) would each tally RBI groundouts later in the inning to give the Crusaders a 3-0 lead.

The fifth inning saw Valpo plate an insurance tally, as Marinec recorded an RBI single to score sophomore Kelsey Phalen (Batavia, Ill./Batavia).  One inning later, the Crusaders closed the scoring as Jacobson reached on a double and came around to score on an error.

The Crusaders tallied 11 hits against the Lady Hornets, led by three base knocks from Marinec.  Alex Lagesse (Beecher, Ill./Beecher) earned the win in the circle, throwing four one-hit innings in her starting role, to improve to 5-1 on the year.  Shaleigh Jansen (Ottawa, Ill./Ottawa Township) came up with her fourth save of the season with three perfect innings, striking out three batters.  Destinee Sanchez took the complete-game loss for Alabama State (2-6).

“We left a lot of runners on base against Alabama State, we just couldn’t get the key hit,” said Crusader head coach Randy Schneider.  “We were kind of due for a game like that though, because we’d been getting the key hit all week.  We wanted to make sure we kept playing good defense and got good pitching and that’s what we did to get the win.”

The nightcap against the host Tigers saw Valpo take on one of the top pitchers in the nation in Auburn’s Anna Thompson, who entered the game ranked seventh in SEC history in strikeouts in a career.  But Crusader sophomore Sam McGee (Bloomington, Minn./Jefferson) matched Thompson with zeroes on the scoreboard in the first three innings in what turned out to be a pitcher’s duel.

Valpo, batting as the home team, would dent the scoreboard first, as in the bottom of the fourth, Phalen launched a solo home run to center field to give the Crusaders a 1-0 lead.  Auburn scored the tying run in the top of the sixth on a pair of Valpo errors, and while the Crusaders would push a runner into scoring position in each of the last two innings of regulation, the game would head into extra innings.

With the International Tiebreaker rule in effect, the Tigers scored a pair of runs, one on a single and one on a sacrifice fly, in the top of the eighth to earn a 3-1 lead.  But Phalen, the runner placed on second for the Crusaders in the bottom half of the frame, came around to score on a wild pitch.  Auburn’s first baseman would later drop a throw down to first on a strikeout that would have been the inning’s third out, allowing Marinec to score the tying run to send the game to the ninth.  But Auburn scored three in the ninth and Valpo was unable to hit the board in the final frame, dropping a tight battle to the SEC foe.

“We put mostly freshmen and sophomores on the field today against Auburn and looked like we belonged on the same field as an SEC team,” said Schneider.  “It was a heck of a ballgame, one that comes down to if we make a couple catches, we come out with the win.  I don’t want to call it a moral victory because I still think we should have won, but I give our kids a lot of credit.  To take a home SEC squad to extra innings is a good effort, and we especially got great performances from all our pitchers, who did a great job keeping us alive and in the game.  We really felt we had as good a team top-to-bottom today, and it’s a heck of an accomplishment to knock one of the top pitchers in the country out of the game.”

Jansen fell to 2-3 on the season as the third Crusader pitcher, giving up all three runs in the ninth, only one of which was earned.  Auburn (13-6) reliever Angel Bunner earned the win to improve to 5-1, while Thompson re-entered the game in the ninth for her fourth save of the season.

“Now it’s on to another test in Marshall,” said Schneider.  “We are still learning about our team, which is what the spring trip is meant to do.  Offensively, we have a very nice ballteam.  Defensively, we’re still learning about how to work best with our pitchers, and we made a couple mistakes today that we can improve on when we get back and get the chance to practice.  This whole experience is continuing to make us a better team, though.”

Valparaiso (12-4) moves on to another tough task on Tuesday afternoon, as the Crusaders travel to Huntington, W.V. to take on a top mid-major program in Marshall.  The doubleheader against the Thundering Herd begins at noon CST on Tuesday, with live stats and video available for both contests at www.valpoathletics.com.