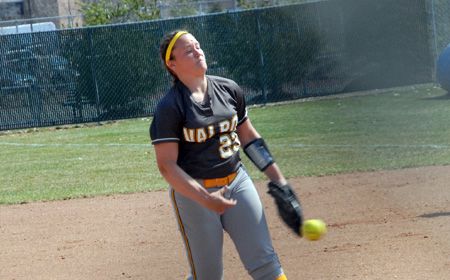 Lagesse appeared in five games in the circle last week for the Crusaders, starting at pitcher twice.  She earned victories in both her starts, tossing a complete-game five-hitter for a win over Saint Francis (Pa.) and then throwing four innings of one-hit ball against Alabama State.  The sophomore also earned two relief victories, entering in the third inning against Gardner-Webb and giving up just one hit in the final seven frames before firing 2.2 innings of shutout ball versus Tennessee State.

Lagesse closed the week with a miniscule 0.31 ERA in her 22.2 innings of work.  The sophomore gave up her only earned run in a relief appearance against Auburn, breaking a string of 25 straight innings without allowing an earned tally.  She struck out 14 batters on the week while walking only three and allowing opponents to hit just .135 off of her.  With her four victories last week, Lagesse now has five total this year, already matching her freshman year total.

Lagesse earned Pitcher of the Week accolades from the Horizon League for the second time in her career.  The sophomore becomes the fourth different Crusader already this year to receive league weekly honors, joining Shaleigh Jansen, Kelsey Phalen and Jordan Rutkowski.