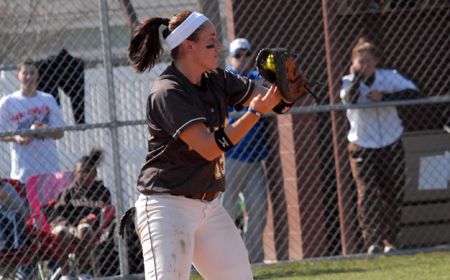 Valparaiso’s 15-day, 17-game, 2,869 mile spring break road trip closed on an extremely high note Saturday, as the Crusaders opened the day with a solid 4-1 win over Missouri State before ending their slate at the KU Invitational in Lawrence, Kan. with a 6-5 walkoff victory over host Kansas.

“I think we had a great ending to a great week today, and we finished it with a thrilling win over a Big 12 school in Kansas,” said Crusader head coach Randy Schneider.  “It’s a good feeling, especially since it was a full team effort.  Everybody really came together to win the ballgame.  I was happy to see us put up another 12 hits today; 25 hits over two games against a major-conference team is a great accomplishment.”

The Crusaders jumped out to a three-run lead on the Jayhawks in the nightcap, as RBI doubles by Lisa DeBruzzi (Carlisle, Mass./Concord-Carlisle) and Sara Strickland (Phoenix, Ariz./Horizon) in the second inning and an RBI single by Jordan Rutkowski (Alden, N.Y./Alden) in the fifth frame put Valpo six outs away from a 3-0 victory.  But Kansas, batting as the road team in its home venue, erased the deficit with one swing of the bat in the top of the sixth, with a three-run homer by Amanda Jobe making it a brand new 3-3 ballgame.

Jessie Marinec (Alsip, Ill./Marist) got the Crusaders going in the bottom of the sixth to help regain the lead, taking advantage of an error to reach base safely leading off the frame.  Sadie Conner (Washington, Ill./Washington) followed with a single, and after the runners both advanced on a wild pitch, DeBruzzi again stepped up with runners in scoring position, connecting on a single that brought both Marinec and Conner across the plate to push Valpo ahead 5-3.

The Jayhawks responded in their final at-bat, though, as a single and triple cut the deficit to 5-4 with the tying run on third base and nobody out.  Shaleigh Jansen (Ottawa, Ill./Ottawa Township) entered in the circle for the Crusaders and induced a popout on the first batter she faced, but an RBI single by Mariah Montgomery tied the game at five apiece.  Kansas went on to have runners on first and second with just one out in an effort to take the lead, but an unconventional double play following an error got Valpo out of the inning.

But the Crusaders would take full advantage of having the last chance to end the game in regulation.  Rutkowski led off the bottom of the seventh with a single, and after Kelsey Phalen (Batavia, Ill./Batavia) advanced her to second with a sac bunt, Joylyn Ichiyama (Torrance, Calif./Redondo Union) came up with a single and advanced to second on the throw.  With runners on second and third and just one out, Kansas elected to intentionally walk Marinec to load the bases and set up a force at any base, but Conner negated the strategy by hitting a fly ball to the fence that went down as a game-winning RBI single which brought home Rutkowski.

Jansen earned the win for the Crusaders, improving to 3-3 on the year by registering the final three outs on defense.  Alex Lagesse (Beecher, Ill./Beecher) started in the circle for Valpo and shut down Kansas (10-11) through five innings before eventually allowing five runs in six-plus innings while striking out six.  Allie Clark took the loss in relief for Kansas, falling to 3-2 on the year.  The Crusaders tallied 12 hits on the game, led by four players with multiple hits.  Marinec scored two runs, while DeBruzzi drove in a career-high three runs.

“There’s just a lot of players who hit the ball well for us today,” said Schneider.  “Obviously Sadie had a big day, not only coming up with the game-winning hit but also laying down a couple nice sacrifices as well.  Joy came up with a key hit for us too, and Lisa just really hit the ball well for us here in Kansas.  Sara did well too, getting two hits for us in both games.”

The opener for the Crusaders didn’t need nearly the dramatics for Valpo to come out victorious.  They took the lead in the top of the third as Strickland scored on an RBI triple by Rutkowski.  Phalen followed with a two-bagger that plated Rutkowski, and the sophomore first baseman eventually came around to score on an error to give the Crusaders a 3-0 lead.

Valpo added an insurance tally in the fourth when pinch-runner KC Boldt (Red Wing, Minn./Red Wing) scored on an RBI single off the bat of Strickland.  That was more than enough for Sam McGee (Bloomington, Minn./Jefferson), who improved to 6-0 on the year with 6.1 innings of work, giving up just one run while striking out seven.  Natalie Rose took the loss for Missouri State (2-11), falling to 0-4.

Jansen entered with one on and one out in the seventh and picked up the final two outs for her fifth save of the year, already tied for second-most in a single season in school history.  Phalen and Strickland both picked up a pair of hits against the Bears.

“It was a heck of a day today, coming out with two wins to close this portion of our schedule with 15 wins,” said Schneider.  “Our goal was to go on this trip, go on the road and have to get on and off the bus and see if we could play well.  We’ve got four big road series in league play and need to be able to play well on the road to finish where we want to in the league standings.  So to see how we were mentally on this trip, getting off the bus and taking the field and playing well, I think we’ll have our shots on the road in league play.”

Valparaiso (15-6) now gets a few days off before returning to action this coming Wednesday with the start of the 2010 home campaign at Valparaiso University Softball Field.  The home slate will kick off with a non-league twinbill against Western Illinois at 2 p.m. CDT.  Both games will be broadcast live on WVUR, 95.1 FM, Valparaiso and online at www.valpoathletics.com, which will also have links for live stats.