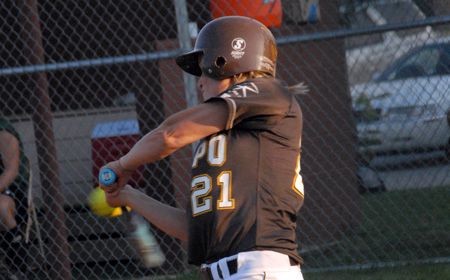 Junior catcher Lisa DeBruzzi (Carlisle, Mass./Concord-Carlisle) was named the Horizon League Batter of the Week today for the week ending March 14 after putting together a stellar performance at the plate in Valpo’s five games last week.

DeBruzzi helped the Crusaders to a 3-2 record last week, including splits at power-conference foes Marshall (Conference USA) and Kansas (Big 12) and a win over Missouri State of the Missouri Valley.  The junior kicked off the week by picking up hits in both ends of the doubleheader at Marshall, while also scoring the game-tying run in the eventual Crusader victory in the nightcap.

DeBruzzi followed with a pair of multi-hit efforts at Kansas, just the second and third multi-hit games of her Crusader career.  She went a perfect 2-for-2 with a run scored in Valpo’s narrow 6-5 loss on Thursday.  The junior then went 2-for-3 with a run scored and a career-best three RBIs in the Crusaders’ 6-5 victory over the Jayhawks Saturday afternoon, including a two-run single which put Valpo ahead in the bottom of the sixth.

On the week, DeBruzzi hit .545 (6-for-11) with three runs scored and three RBIs, while also slugging .636 and reaching base at a .643 clip.  She is now hitting .302 overall this season while mainly starting behind the plate for the Crusaders.

DeBruzzi becomes the fifth different Crusader player already this year to earn weekly honors from the Horizon League, including the third Valpo Batter of the Week.  Kelsey Phalen and Jordan Rutkowski previously earned Batter of the Week accolades, while Shaleigh Jansen and Alex Lagesse have brought home Pitcher of the Week honors.  With the weekly honor, DeBruzzi is now eligible for the Horizon League Network’s ‘The People’s Choice’ honor.  Fans can vote for DeBruzzi by visiting www.horizonleaguenetwork.tv and voting in ‘The People’s Choice’ poll on the right-hand side of the page thru Tuesday afternoon.