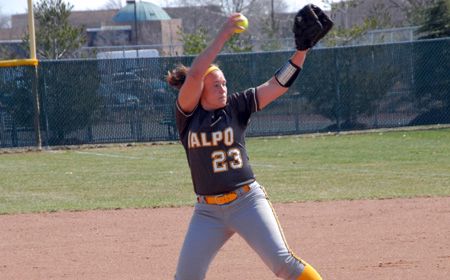 Alex Lagesse (Beecher, Ill./Beecher) and Shaleigh Jansen (Ottawa, Ill./Ottawa Township) combined on a four-hit shutout in the nightcap Wednesday in Fort Wayne, Ind., while Jessie Marinec’s (Alsip, Ill./Marist) solo homer to lead off the second was the only run in Valparaiso’s 1-0 victory over IPFW.  The Mastodons got a walk-off double in the opener to earn a 2-1 win.

“There were good pitching performances by both teams today,” said Crusader head coach Randy Schneider.  “Neither team was really able to hit the ball well.  I was a bit disappointed that we weren’t able to lay down bunts when we had opportunities to move runners into scoring position, and I thought we looked at too many pitches.  I did think Alex pitched a very good game in the second game and Shaleigh came in and slammed the door.”

Sara Strickland (Phoenix, Ariz./Horizon) led off the day’s second game with a triple, but was eventually cut down at home on an infield groundball.  But Marinec put the Crusaders in front at the start of the second frame, driving a 1-0 pitch over the scoreboard beyond the left-center field fence.  Valpo would get just two other runners into scoring position the rest of the way, one of them on a two-out triple by Jill Jacobson (Beecher, Ill./Beecher) in the seventh, but could not push another run across the plate.

But another tally was not necessary as the duo of Lagesse and Jansen shut down the Mastodons.  Lagesse scattered four hits through the first four innings, with only a fourth-inning double putting an IPFW runner in scoring position.  She then retired the final eight batters she faced, closing out a six-inning, four-hit, no-walk effort to improve to 6-3.  Jansen came in for the seventh and retired the side in order, including a pair of strikeouts, for her sixth save of the year, second-most in the nation.

Marinec extended her team-best hitting streak to eight games with her round-tripper in the nightcap.   Jordan Rutkowski (Alden, N.Y./Alden), who entered the game ranked seventh in the nation in batting average, went 2-for-2 in the second game, while three other Crusaders also tallied hits.  Amanda Olender took the loss for IPFW in her five innings of work, falling to 3-3.

The Mastodons put up the first run in the opener with a pair of doubles, but Valpo knotted things up in the top of the third.  Tori Brown (Harrison, Ohio/Harrison) led off the frame with a single and stole second.  With two outs, Joylyn Ichiyama (Torrance, Calif./Redondo Union) knocked a single into center field to score Brown.  It looked like the Crusaders might take the lead on a double by Rutkowski, but Ichiyama was gunned down at the plate to keep the game tied at one.

Valpo would get just one runner into scoring position the remainder of the game, a runner on second with one out in the fourth, but back-to-back strikeouts ended that threat, starting a stretch where the last 11 Crusaders to bat were retired in order.  Sam McGee (Bloomington, Minn./Jefferson) kept the Mastodons off the scoreboard after the opening frame until the seventh, when a one-out double with a runner on first by Ava Hall gave IPFW (13-10) the walk-off victory.

McGee suffered her first loss of the season, falling to 6-1 this year, but struck out seven Mastodon hitters in her 6.1 innings of work.  Courtney Cronin went the distance for IPFW, striking out ten to improve to 7-6.  Ichiyama had a two-hit effort in the opener for the Crusaders.

“I thought we should have hit the ball a bit better today, but Cronin especially is a pretty decent pitcher and pitched well against us,” said Schneider.  “It was great to see the pitching performances we got, to help keep us in two one-run ballgames.”

Valparaiso (16-7) returns to action with its home and Horizon League openers this Saturday at the Valparaiso University Softball Field against Green Bay.  First pitch of the doubleheader is slated for noon, with live stats available at www.valpoathletics.com.