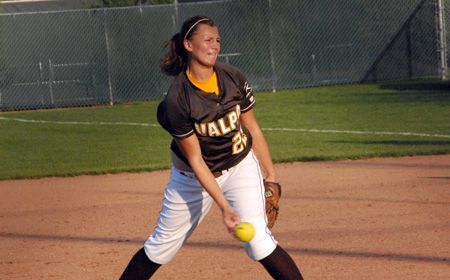 Valparaiso opened its home campaign at the Valparaiso University Softball Field, along with the Horizon League slate, with a pair of shutout victories over Green Bay Saturday afternoon, defeating the Phoenix 8-0 in the opener and 3-0 in the nightcap.  Shaleigh Jansen (Ottawa, Ill./Ottawa Township) set Valpo’s single-season saves record and moved into a tie for first nationally, picking up her seventh save of the year in the latter game.

“It’s obviously huge for us to start off league play with two victories,” said Crusader assistant coach Rachel Folden.  “Before the games, Coach Schneider talked to the team about the importance of getting off to a strong start in the league, and that’s exactly what we did today.  It’s especially awesome to have the wins be two shutouts, says a lot about how strong both our pitching and our defense performed for us today.”

Neither team could crack the scoreboard in the second game of the day through three and a half innings, despite both squads getting runners on third multiple times during that stretch.  Valpo would record the game’s first run in the bottom of the fourth, though, as Sadie Conner (Washington, Ill./Washington) led off the inning with a single.

Pinch-runner Hayley Bridwell (Lemont, Ill./Lemont) eventually made her way to third with Lisa DeBruzzi (Carlisle, Mass./Concord-Carlisle) reached on an error.  DeBruzzi stole second with two outs, and when Green Bay’s catcher attempted to pick Bridwell off of third on the play, her throw ricocheted off of Bridwell and down the left-field line, allowing the freshman to score the game’s opening run.

Green Bay looked in position to tie or take the lead in the fifth, as the Phoenix loaded the bases with one out.  Jansen relieved Sam McGee (Bloomington, Minn./Jefferson) and induced a flyout to medium-deep left field on which Phoenix baserunner Sam Schmeltzer was unable to advance from third.  Sara Junion then grounded to short, where Jessie Marinec (Alsip, Ill./Marist) went for the force play at second and Joylyn Ichiyama (Torrance, Calif./Redondo Union) corralled the throw and tagged the base just before the Phoenix baserunner to maintain the one-run Crusader advantage.

Valpo added a pair of key insurance runs in the bottom half of the fifth.  Sara Strickland (Phoenix, Ariz./Horizon) led off the frame with a single, and a pair of Green Bay errors loaded the bases with nobody out.  A fielder’s choice erased the Crusaders’ lead runner, but with one out, Conner delivered a two-RBI single through the left side that pushed the Valpo lead to 3-0, plating Ichiyama and Jordan Rutkowski (Alden, N.Y./Alden).  The Phoenix would put one runner on in the sixth and two on in the seventh, but neither time could advance anybody to even third base as Jansen and the Crusaders preserved the clean sheet.

McGee scattered seven hits in her 4.1 innings of work, striking out four Green Bay hitters as she improved to 7-1 on the season.  Jansen gave up back-to-back infield singles in the seventh, but otherwise was flawless as she earned her seventh save of the year to set Valpo’s new single-season mark, breaking Andrea Zappia’s record of six set in 2006.  Katie Cooney took the complete-game loss for the Phoenix, falling to 2-5 despite not giving up an earned run.

The first game saw the Crusaders jump out to a three-run lead in the second inning and never look back.  Conner led off the frame by drilling a solo homer to straightaway center field, and later in the inning both DeBruzzi and Jill Jacobson (Beecher, Ill./Beecher) would cross the plate on a double ripped down the left-field line by Strickland.

Valpo kept the train rolling in the third with another three-spot.  With one out, Kelsey Phalen (Batavia, Ill./Batavia) roped a double to center field and then scored on a single by Marinec.  DeBruzzi followed with a deep fly ball that got up into the wind and landed just beyond the left-field fence for her first career home run, a two-run shot that pushed the Crusader advantage to 6-0.  Bridwell scored on a wild pitch in the fifth and DeBruzzi followed with a sacrifice fly that plated Marinec to close out the opener via run rule in five innings.

Alex Lagesse (Beecher, Ill./Beecher) was stellar in the circle for Valpo in the opener, tossing a complete-game three-hitter to improve to 7-3 and lower her ERA this year to 1.60.  Lauren Beres took her first loss of the year for Green Bay (11-6, 0-2 Horizon), falling to 4-1 after giving up six runs in 2.2 innings of work.

“In the first game, I feel like we just came out really aggressive at the plate,” said Folden.  “We talked about being aggressive at bat, and it really paid off in the opener.  The second game, Green Bay’s pitcher was throwing a few more balls, and so we started to get comfortable with taking more pitches, maybe too many.  Once we started being aggressive again, we got runners on base and made plays happen to bring runs across the plate.”

Strickland led the Crusaders at the dish on the day with a 5-for-6 effort which included three doubles.  Conner went 4-for-6 with a homer and tied for team-high honors with three RBIs, while DeBruzzi also brought home three runs and scored two tallies of her own.  Meanwhile, the pair of shutouts by the Valpo pitching staff extended its scoreless streak to 19 straight innings.

Valparaiso (18-7, 2-0 Horizon) attempts to sweep the three-game series on Sunday when the Crusaders host the Phoenix in the final game of the set at the Valparaiso University Softball Field at noon.  Live stats are available at www.valpoathletics.com.