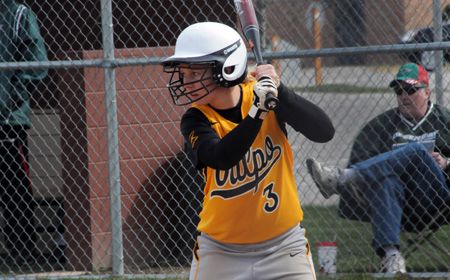 Valparaiso was sharp in all aspects of the game in a doubleheader sweep of Northern Illinois Wednesday at the Valparaiso University Softball Field, downing the Huskies 9-0 in the opener and 14-2 in the nightcap.  The Crusaders matched their program record of four straight shutouts with the blanking in the day’s first game, and also got to 20 wins the fastest of any team in program history.

“It was great to see the way we came out ready to play today,” said Crusader head coach Randy Schneider.  “We obviously hit the ball extremely well and were very aggressive at the plate in conditions that warranted being aggressive (wind blowing out at 20+ MPH).  I also credit our pitching and defense for working hard, getting ground balls and keeping the ball in the park.  Other than a couple rough innings in the second game, we did a pretty good job spreading out NIU’s hits and keeping their score down.”

Valpo got the scoring started quickly in the opener, as sophomore Jordan Rutkowski (Alden, N.Y./Alden) launched a two-run homer in the bottom of the first, followed immediately by a solo shot from junior Sadie Conner (Washington, Ill./Washington).  Later in the frame, freshman Tori Brown (Harrison, Ohio/Harrison) delivered a two-out double down the left field line to increase the Crusader lead to 5-0 after just one inning.

Sophomore Sara Strickland (Phoenix, Ariz./Horizon) kept the scoreboard rolling by leading off the second inning with a solo homer to right-center field.  Conner would come around to put up another tally after doubling and completing the journey around the bases on a single by sophomore Kelsey Phalen (Batavia, Ill./Batavia).  The Crusaders closed the scoring in the third as an RBI double by sophomore Joylyn Ichiyama (Torrance, Calif./Redondo Union) plated junior Lisa DeBruzzi (Carlisle, Mass./Concord-Carlisle) and Strickland followed right behind DeBruzzi thanks to an NIU error.

Sophomore Alex Lagesse (Beecher, Ill./Beecher) earned the victory in the opener, improving to 8-3 after tossing three innings of one-hit ball.  Freshman Amanda Bolton (Phoenix, Ariz./Horizon [Arizona]) and senior Carrie Franson (Arlington, Wis./Poynette) closed out the game with one perfect inning apiece, each striking out one NIU batter.  Whitney Owen took the complete-game loss for the Huskies, falling to 2-4, while also delivering NIU’s only hit.

The nightcap again saw the Crusaders jump out to a lead they would not relinquish in the bottom of the first.  A Strickland single, Ichiyama double and Rutkowski walk loaded the bases with nobody out, and Conner and Phalen brought home runs with RBI groundouts to give Valpo a 2-0 lead after one frame.  Two innings later, freshman Jessie Marinec (Alsip, Ill./Marist) delivered a two-RBI single to increase the lead to four runs.  Freshman Jennifer Hermanson (Beecher, Ill./Beecher) connected on an RBI single later in the inning and later scored on an NIU error, while Brown added an RBI groundout to push the Valpo advantage to 7-0 after three.

Northern Illinois cracked the scoreboard for the first time in the top of the fourth, posting two runs on a leadoff homer and a sacrifice fly.  But the Crusaders put a seven-spot on the scoreboard in their half of the frame, highlighted by a three-run homer from Phalen and RBI pinch-hits from junior KC Boldt (Red Wing, Minn./Red Wing) and senior Whitney Warner (Greenwood, Ind./Center Grove), as Valpo closed out its second run-rule win of the day.

Sophomore Sam McGee (Bloomington, Minn./Jefferson) pitched three shutout innings in the day’s second game to improve to 8-1, while sophomore Shaleigh Jansen (Ottawa, Ill./Ottawa Township) closed out the game by tossing the game’s final two frames.  Monica Segura took the loss for NIU (10-18), throwing all four innings to drop to 2-7 on the year.

Strickland led the Crusaders at the plate on the day out of the leadoff spot, tallying four hits and tying for team-high honors with four runs scored, a number which Conner matched.  All three of Ichiyama’s hits were two-baggers, while Phalen delivered a team-best five RBIs.

Valparaiso (20-7) returns to Horizon League action on Friday afternoon at noon CDT with a doubleheader at Detroit.  Live stats and live chat for both games will be available at www.valpoathletics.com.