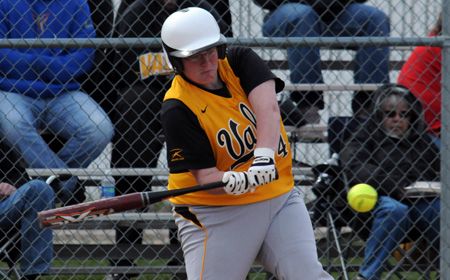 Whitney Warner hit her second career grand slam Saturday. (Ray Acevedo)
Valparaiso at Detroit | April 03, 2010
Related Links
Related Links
Valparaiso ended its sweep of a three-game series in Detroit on Saturday afternoon with a bang, hitting two grand slams in the fifth inning of a 16-1, five-inning victory over the Titans.  The win was the 105th in the careers of seniors Carrie Franson (Arlington, Wis./Poynette) and Whitney Warner (Greenwood, Ind./Center Grove), making them the winningest class in Crusader softball history.

Warner hit one of the two grand slams in the eight-run fifth inning, capping the inning with the second four-run shot, a line drive that cleared the center field fence.  It was the second career grand slam for the senior.  The other grand slam came off the bat of freshman Jennifer Hermanson (Beecher, Ill./Beecher), a shot to right field that went out of the park for her first career home run.

One day after matching the program record for runs scored in a single game, the Crusaders set a new mark Saturday for total runs in back-to-back games with 34.  Valpo also set a new record for most consecutive games reaching double figures in runs, scoring ten or more for the fourth straight contest, and won its eighth straight game, the second eight-game win streak of the year for the Crusaders.  In addition, each of the last five wins for Valpo has been of the run-rule variety.

The Crusaders again jumped up on top in the top of the first Saturday, although it looked for a time that they wouldn’t be able to score.  Valpo’s first two batters were retired in order and Jordan Rutkowski (Alden, N.Y./Alden) was down in the count 1-2 before working a walk.  Sadie Conner (Washington, Ill./Washington) continued her hot hitting of late with a RBI double down the left-field line, and Kelsey Phalen (Batavia, Ill./Batavia) followed with an RBI two-bagger of her own.  Jessie Marinec (Alsip, Ill./Marist) then took the first pitch she saw back up the middle to score Phalen, giving Valpo a 3-0 lead after one-half inning.

Detroit would get a run back in the bottom of the first to cut its deficit to two runs, and both squads went scoreless in the second inning.  But the Crusaders put some insurance on the board in the third, as Rutkowski led off the inning getting hit by a pitch and Phalen followed two batters later with her second double of the game.  Marinec then blasted a triple to the fence in right field, scoring both runners, and Warner had a productive out with a grounder to short that plated Marinec to push the Valpo edge to 6-1.

One inning later, the Crusaders put two more runs on the board on RBI singles by Joylyn Ichiyama (Torrance, Calif./Redondo Union) and Conner.  Then the offensive explosion happened in the fifth inning, as Warner reached on an error and KC Boldt (Red Wing, Minn./Red Wing) and Sara Strickland (Phoenix, Ariz./Horizon) hit back-to-back singles to set up Hermanson’s four-bagger.  With the bases cleared, Lisa DeBruzzi (Carlisle, Mass./Concord-Carlisle) stepped up with a pinch-hit single, and Conner and Phalen each followed with singles as well.  Two batters later, Warner would deliver Valpo’s second four-run shot of the frame.

Sam McGee (Bloomington, Minn./Jefferson) started in the circle for Valpo and tossed three innings, improving to 9-1 while giving up two hits and one run.  Alex Lagesse (Beecher, Ill./Beecher) threw the final two innings, extending her scoreless streak to 20 straight innings.  Anna Bondy started and took the loss for Detroit (2-16, 0-6 Horizon), falling to 2-7 after giving up seven runs in three-plus innings.

The Crusaders totaled 16 hits on the day, led by three base knocks apiece off the bats of Conner, Phalen and Strickland.  Phalen crossed the plate three times as well, while Warner drove in a team-best five runs on the day.  Valpo closed the three-game series with 44 total runs and 45 total hits, hitting .489 for the series.

“I think our entire team contributed to a nice three-game series win this weekend,” said Crusader head coach Randy Schneider.  “I’m happy about the fact that so many kids had big weekends to help in the effort, that’s probably the best part.  I’m also happy we’re 5-0 at this point in league play, but we just need to continue to plug away throughout the month of April.”

Valparaiso (23-7, 5-0 Horizon) is scheduled to return to action with a league doubleheader against Butler on Tuesday from the Valparaiso University Softball Field.  First pitch of game one is slated for a 3 p.m. start.  Game two will be carried live on WVUR, 95.1 FM, Valparaiso and online at www.valpoathletics.com, while live stats for both games will also be available on the official Crusader website.