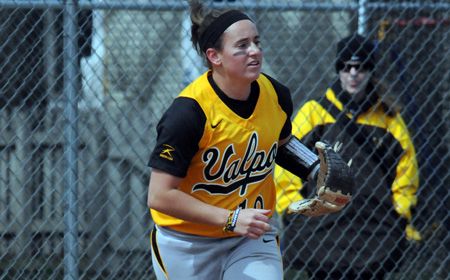 Valparaiso infielder Sadie Conner (Washington, Ill./Washington) and pitcher Alex Lagesse (Beecher, Ill./Beecher) have been named the Horizon League Hitter and Pitcher of the Week, respectively, after helping to lead the Crusaders to a perfect 5-0 record last week with all five victories coming via run rule.

Conner earned her first career weekly honor from the league office after having a spectacular week at the plate.  The junior third baseman was moved to the cleanup spot prior to the first game against Northern Illinois  and responded, going 11-for-16 (.688) over the week’s five games with 11 runs scored and nine RBIs.Conner hit safely in all five games, including four multi-hit efforts, scored multiple runs in all five games and drove in at least one run in all five games.

Against Northern Illinois, Conner went 3-for-5 in the doubleheader sweep, including a double and a home run.  She crossed the plate four times against the Huskies and also drove in two runs.  Then in the three-game league series at Detroit, the junior went a stellar 8-for-11, including four doubles and a homer.  She scored seven times in the three outings against the Titans while also driving in seven runs.  Conner’s round-tripper at Detroit was the tenth of her career, tying her for fifth all-time in Crusader history.

Lagesse’s honor was her second consecutive weekly award, as well as her third of the season and fourth of her career.  She tossed nine shutout innings last week over three appearances to extend her streak of scoreless innings to 20 straight.  Lagesse threw three innings in the opener against Northern Illinois, allowing just one hit while striking out four to earn the win.  The sophomore then started the opener at Detroit, picking up the victory with four innings of two-hit ball and five strikeouts, before closing the final game of the set with two shutout innings of relief.  The pair of wins improves Lagesse’s record this year to 9-3, while she lowered her season ERA to 1.39.

Conner, Lagesse and the rest of the Crusaders return to the field for the start of a key three-game Horizon League series on Tuesday afternoon, as first-place Valpo takes on second-place Butler.  The doubleheader begins from the Valparaiso University Softball Field at 3 p.m.