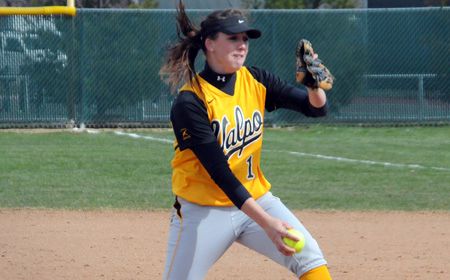 Valparaiso got a pair of outstanding pitching performances on Tuesday afternoon as the Crusaders swept a home doubleheader from IUPUI by scores of 2-1 and 4-0.  The two wins give Valpo 26 to date this season, already fourth-most in a single year in program history.

Alex Lagesse (Beecher, Ill./Beecher) earned the complete-game victory in the opener, tossing a six-hitter while striking out eight IUPUI batters to improve to 11-3.  The sophomore only allowed a run in the sixth inning, the first earned run Lagesse has given up in the last 34.2 innings.  The nightcap saw Sam McGee (Bloomington, Minn./Jefferson) bump her record to 10-2 after striking out nine and giving up just two singles in six innings.  Shaleigh Jansen (Ottawa, Ill./Ottawa Township) closed out the nightcap by striking out the side in the seventh inning.

“Obviously, you judge a big part of the game by the number of hits you get, and we just didn’t hit the ball well today,” said Crusader head coach Randy Schneider.  “But we definitely had very good pitching and defensive performances.  Alex continues to pitch really well, and while she allowed an earned run today, it was still a heck of a streak she pitched without allowing one.  Sam tossed a very good game as well, allowing just two singles, and the two of them have really combined to give us a great 1-2 punch in the circle.”

Junior catcher Lisa DeBruzzi (Carlisle, Mass./Concord-Carlisle) got the scoring started in the opener in the fourth inning, as with two outs, she stepped up and fouled off the first five pitches of the at-bat before launching a solo homer over the left-field fence.  A pair of doubles brought home the tying run for the Jaguars in the top of sixth inning.

Heading into the bottom of the seventh, the game was still tied at one, but Tori Brown (Harrison, Ohio/Harrison) got the Crusader rally started with an 0-2 double to the right-center gap.  Pinch-runner Hayley Bridwell (Lemont, Ill./Lemont) could not advance on a pair of outs, but Kelsey Phalen (Batavia, Ill./Batavia) fouled off three pitches after reaching two strikes before delivering a single into center field that served as a walk-off hit, plating Bridwell.

Samantha Bumbaugh took the complete-game loss for IUPUI in the opener, falling to 2-13 on the year.  Sara Strickland (Phoenix, Ariz./Horizon) banged out three of Valpo’s eight hits in the day’s first game and also stole a base, while Brown also tallied a pair of base knocks.

The second game saw an oddity, as the Crusaders did not register an RBI despite scoring four runs, taking advantage of Jaguar miscues to post tallies on the scoreboard.  The first run came in the bottom of the second, as freshman Jennifer Hermanson (Beecher, Ill./Beecher) reached on a two-out single and then came all the way around to score on a three-base error by the IUPUI first baseman.

The fourth inning brought two more Crusader runs to the scoreboard, as Brown, Hermanson and KC Boldt (Red Wing, Minn./Red Wing) tallied three straight singles to load the bases with one out.  After a popout, Jaguar hurler Nicole Natter unleashed a pair of wild pitches during Strickland’s at-bat, allowing first Brown and then Hermanson to trot across the plate.  Valpo’s final run was scored by Bridwell in the fifth inning, as the freshman scored on yet another wild pitch in her second pinch-running appearance of the day.

“I’ve got to give Tori and Kelsey credit for their hits in the last inning of the first opener,” said Schneider.  “They both found themselves in two-strike counts and battled back to get key hits.  We just have to continue as a team to work on our hitting, getting in for more reps and making adjustments.  But we’ll take two wins today and move on to Purdue on Thursday and just try to continue to get better as a team.”

Hermanson led the Crusaders in the second game, going 2-for-3 with two runs scored to go along with a pinch-hit single in the first game.  Five other Valpo hitters tallied a base knock apiece as it closed the game with seven hits.  Amy Raker took the loss in the circle for IUPUI (10-30), allowing two earned runs in 3.1 innings of work to fall to 3-4.

Valparaiso (26-8) will return to the diamond on Thursday afternoon as the Crusaders make the short trip to West Lafayette to take on Purdue.  First pitch of the doubleheader is slated for 2 p.m. CDT, and live statistics and live chat for both games will be available at www.valpoathletics.com.