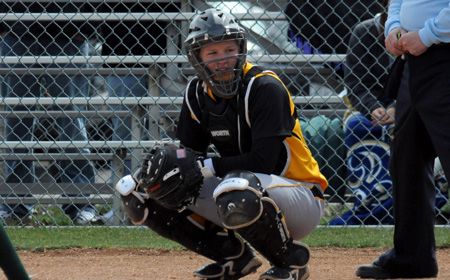 The Boilermakers got the scoring started in the opener right away as Liane Horiuchi led off with a walk and proceeded to steal second and third.  Molly Garst followed with a walk and in the same motion took off for second.  Crusader pitcher Alex Lagesse (Beecher, Ill./Beecher), who had received the throw back to the circle, wheeled to try to catch Horiuchi off of third, but her attempt was errant, allowing Horiuchi to score and Garst to advance to third.  Garst would come home on an RBI single one batter later to give Purdue a 2-0 lead after one inning.

But the Crusaders counter-punched immediately in the top of the second, putting together a two-out rally.  Tori Brown (Harrison, Ohio/Harrison) got it started with a single to right-center, and Jessie Marinec (Alsip, Ill./Marist) followed with a walk to put two runners on for Lisa DeBruzzi (Carlisle, Mass./Concord-Carlisle).  The junior unloaded on a 1-0 pitch to left field for her third home run of the season and second in the last three days, putting Valpo on top 3-2.

Lagesse kept Purdue off the scoreboard until the fourth inning, when a two-out triple brought home the tying run.  Then, after two were out in the fifth, miscues cost the Crusaders again, as a catcher’s interference call, a hit batsman and an infield single loaded the bases, and another catcher’s interference stoppage plated the go-ahead run for Purdue.  The Boilermakers added an insurance tally in the sixth on a fielding error by Valpo, and while the Crusaders brought the go-ahead run to the plate in the top of the seventh with one out, they were unable to push anything more across the plate.

Lagesse took the loss for Valpo, falling to 11-4 on the year after giving up four runs (three earned) on six hits in 4.2 innings of work.  Suzie Rzegocki registered the complete-game win for the Boilermakers, allowing just four hits while striking out eight.

The nightcap saw the Crusaders strand seven runners on base, including at least one in scoring position in four of the five innings, while they were unable to push a run across the plate.  Meanwhile, Purdue took advantage of four Valpo errors to score four unearned runs in the second game and the Boilermakers scored four runs in the bottom of the fifth, including a game-ending three-run homer by Shelby Krammer, to end the game via run rule.

Sam McGee (Bloomington, Minn./Jefferson) took the loss for Valpo in the nightcap, giving up four runs in 3.1 innings in the circle, but just one of the four tallies was of the earned variety.  Rzegocki earned her second complete-game win of the day for Purdue (19-21), improving to 15-16 while scattering five Crusader hits in her five innings of work.

Valparaiso (26-10) will look to rebound in its return to Horizon League play on Saturday afternoon, as the Crusaders make the short trip west into the Second City to take on UIC.  First pitch of the twinbill is slated for 1 p.m., and live stats and live chat for both games will be available at www.valpoathletics.com.