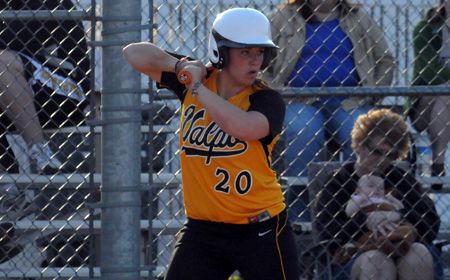 Valparaiso played from behind the whole game on Sunday afternoon in Chicago, Ill., and despite a seventh-inning rally, could not complete the comeback as the Crusaders fell 4-3 to UIC in Horizon League action.

The Flames jumped out on top right away in the first inning Sunday.  Melinda Macias led off the frame with a double and two batters later, Brooke Frydendall tallied an infield single.  Crusader pitcher Alex Lagesse (Beecher, Ill./Beecher) then gave up a three-run homer down the left-field line to her counterpart in the circle, Ashley Hewett, that put the Flames on top 3-0.

Valpo cut a run off of its deficit in the third inning.  With one out, Sara Strickland (Phoenix, Ariz./Horizon) walked, and then promptly stole second, advancing to third when an overthrow into center field was misplayed by the Flames’ outfielder.  Jordan Rutkowski (Alden, N.Y./Alden) brought her classmate home with a sacrifice fly to deep left field to move to within 3-1.

UIC added a key insurance tally in the bottom of the sixth inning, as a leadoff walk came around to score on a two-out single by Frydendall to push the Flame lead to 4-1.  But the Crusaders, who had just three hits in the first six innings, got back-to-back singles from Jessie Marinec (Alsip, Ill./Marist) and Lisa DeBruzzi (Carlisle, Mass./Concord-Carlisle) to lead off the seventh, and when Tori Brown (Harrison, Ohio/Harrison) walked, Valpo was bringing the potential go-ahead run to the dish with nobody out.

Devin Miller, who earned the win against the Crusaders in the series opener Saturday, entered the game at pitcher and promptly set down the first two Valpo batters she faced, KC Boldt (Red Wing, Minn./Red Wing) and Strickland, on strikes.  Rutkowski came up with a hard-hit single into center field to score the two lead runners and cut the deficit to just one run, but the comeback effort fell just short as Joylyn Ichiyama’s (Torrance, Calif./Redondo Union) grounder to the left side was just taken to third base for the force play to end the game.

No Crusader would come up with multiple hits on the day, but Rutkowski went 1-for-1 with three RBIs, a walk, a sacrifice bunt and a sacrifice fly.  Lagesse took the loss in the circle, falling to 11-6 after going just one-plus inning.  Sam McGee (Bloomington, Minn./Jefferson) came in and tossed 4.2 innings of one-run ball.  For UIC (11-29, 4-6 Horizon), Hewett improved to 6-14 while Miller earned her first save of the year.

“You’ve got to credit Hewett for turning things around today and putting together a good pitching performance,” said Crusader head coach Randy Schneider.  “I thought she was throwing the ball better than she did yesterday.  For us, I think starting out down three runs and not hitting the ball early hurt us, forcing us to try to play catch-up and change our strategy.  I give our kids a lot of credit for the comeback in the seventh inning, but I’m disappointed we didn’t complete the series.  We gave up two multiple-run innings in the series and it cost us two losses.  I think if we had spread out the runs a little bit better it would have been a different story.”

Valparaiso (27-12, 7-3 Horizon) steps out of league play for the final time in the regular season on Wednesday afternoon as the Crusaders make the short jaunt east to South Bend to face Notre Dame in a single game.  First pitch is slated for 3 p.m. CDT.