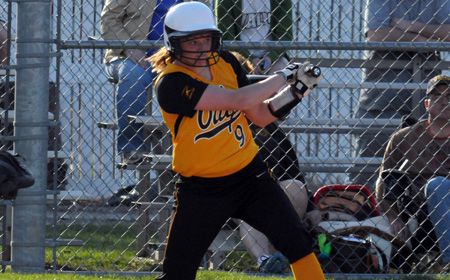 “We came out prior to the game today, and we had a plan to take a completely different approach to our at-bats,” said Crusader head coach Randy Schneider.  “I was happy to see that that plan worked, especially facing the quality of pitching that Notre Dame has, To see our kids being successful at the plate and making good adjustments.”

The Crusaders showed immediately Wednesday that they would not be intimated by the nationally-ranked Irish, as Sara Strickland (Phoenix, Ariz./Horizon) led off the game with a single through the left side of the infield.  With two outs, the sophomore swiped second base, but the steal proved unnecessary when one pitch later, Kelsey Phalen (Batavia, Ill./Batavia) launched a home run deep into the bleachers down the left-field line to give Valpo a 2-0 lead.  For Phalen, it was her sixth long ball of the season, tying for team-high honors and tied for fourth in a single season in Valpo history.  It also marked a team-best 30 RBIs for the sophomore, already good for a tie for third-best in a single season all-time at Valpo.

The Irish responded in their half of the first, putting a pair of runners on with base hits before Dani Miller hit a homer off the scoreboard in left-center field to give Notre Dame a 3-2 advantage.  But Sam McGee (Bloomington, Minn./Jefferson) kept the Irish off the scoreboard the rest of the inning.

Notre Dame’s lead lasted exactly one pitch into the second inning, as Lisa DeBruzzi (Carlisle, Mass./Concord-Carlisle) took the first pitch she saw to lead off the inning to straight-away center field for her fourth homer of the season and her third in the last eight days.  With the score now tied at 3-3, Jessie Marinec (Alsip, Ill./Marist) ripped a triple to the fence down the right-field line and Tori Brown (Harrison, Ohio/Harrison) took her first pitch and dropped it down the same line for an RBI double to put the Crusaders ahead.

McGee got the first two outs in the second, but after a single by Katie Fleury, Alex Lagesse (Beecher, Ill./Beecher) came in from the bullpen to relieve her fellow sophomore.  Lagesse gave up base knocks to the first two batters she faced, the second of the RBI variety by Heather Johnson to tie the game at four apiece.  But Lagesse got Christine Lux to fly out to deep center with two runners in scoring position to keep the game tied into the third.

Four runs through two innings was enough to chase Irish starter Jody Valdivia, who hadn’t given up an earned run in her last 36 innings and carried a miniscule 1.40 ERA into the game, as Notre Dame brought in reliever Brittany O’Donnell to start the third inning.  With relief pitchers in the game for both sides, the game settled down, as neither side would score in the next two innings.  Valpo had one hit in the third and a pair of walks in the fourth, but could do nothing with those runners, while Lagesse set down the side in order in both frames.

The fifth was a different story for the Crusaders, however.  It looked like another zero would go up on the scoreboard, as after Jordan Rutkowski (Alden, N.Y./Alden) reached on a leadoff walk, she was forced at second on a Phalen grounder and the next Valpo batter flew out.  But DeBruzzi lined a first-pitch single back up the middle to move Phalen to second with two outs, and Marinec followed with a double to the wall in right-center to give Valpo a 5-4 edge.  Marinec’s two-bagger set a new Crusader team single-season record, as it was their 69th  Notre Dame got a leadoff single in its half of the frame, but Lagesse, DeBruzzi and Joylyn Ichiyama (Torrance, Calif./Redondo Union) teamed up on a strikeout/caught stealing double play to end the inning. double of the year.

The Crusaders had a good opportunity to add to their advantage in the sixth, but on an infield single by Strickland, Jill Jacobson (Beecher, Ill./Beecher) took off from second with nobody out anticipating the shortstop would attempt the play at first.  Instead, the throw went to third to nail the lead runner for the first out.  In Notre Dame’s half of the inning, it pushed the tying run across the plate on a single by Brianna Jorgensberg, as the ball popped out of DeBruzzi’s glove while tagging pinch-runner Kelsey Thornton after a perfect throw home by Jacobson.  Jorgensberg, who advanced to second on the throw home, then scored the go-ahead run on a single by Alexa Maldonado.

Valparaiso still had some fight left in its bats, however.  A one-out single by DeBruzzi got the Crusaders’ rally going, and a walk and hit batsman loaded the bases with two away.  Strickland stepped up to the plate and came up with the biggest hit of the game, slapping a 1-2 pitch through the left side to score pinch-runner Hayley Bridwell (Lemont, Ill./Lemont) and tie the game at 6-6.

Fleury led off the bottom of the seventh for the Irish with a hard single up the middle after fouling off five two-strike pitches, and following a sacrifice bunt, the Crusaders went back to the bullpen, bringing in relief ace Shaleigh Jansen (Ottawa, Ill./Ottawa Township).  A wild pitch advanced Fleury to third with one away, which prompted Valpo to intentionally walk the next two batters, the Irish’s three and four hitters.  But Miller hit a 1-2 pitch down the line into fairly deep left field, and while Jennifer Hermanson (Beecher, Ill./Beecher) made the catch for the second out, her throw had no chance to cut down the speedy Fleury as she crossed with the game-winning tally.

The Crusaders totaled 12 hits on the day, the most by an Irish opponent this season.  DeBruzzi and Strickland both came up with three-hit ballgames, while Phalen and Marinec added a pair of hits apiece.  Phalen also led Valpo with two runs scored and two RBIs.  Pitzenberger recorded three hits for Notre Dame (35-7) while Miller drove in a game-best four runs.

Lagesse took the hard-luck loss for Valpo, falling to 11-7 on the year despite giving up just one earned run (three runs total) in her 4.2 innings of work.  Reliever Jackie Bowe, who came in three batters into the seventh inning for the Fighting Irish, left with the victory despite allowing the tying run to cross the plate, improving to 1-2.

“This game, if anything, reminds us why we play midweek games and why we play quality opponents like Notre Dame,” said Schneider.  We wanted to come into this game and learn a bit about ourselves, and I do feel like we got out of it what we needed to. On the flip side, I’m not necessarily into moral victories.  It’d have been nice to win the game, which I feel like we should have done, but maybe next time there’ll be a little Irish luck on our side.”

Valparaiso (27-13) completed the non-league portion of the 2010 regular season schedule with Wednesday’s game, and now has just four three-game Horizon League series remaining on the slate.  First up is Loyola, as a doubleheader Saturday at noon at the Valparaiso University Softball Field will kick off the three-game set.  Both games will be broadcast live on WVUR, 95.1 FM, Valparaiso and online at www.valpoathletics.com, which will also have links for live stats.