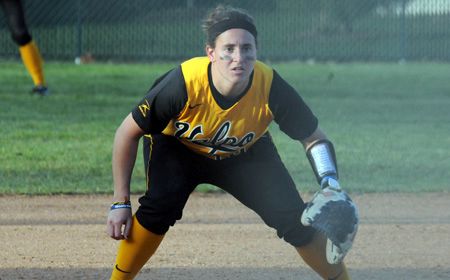 On an overcast day at the Valparaiso University Softball Field, the Crusader softball team brought some sunshine to the field, dominating in all facets of the game as it swept a key Horizon League doubleheader from Loyola, taking the first game 4-0 before ending the second game by a 9-1 score in five innings.  Valpo has now won 29 games this season, just one win shy of matching the school record for victories in a single season.

“When all three parts of your game are clicking; when you hit the ball well, play great defense and get great pitching, you’re going to have a great opportunity to win, and we did that twice today,” said Crusader head coach Randy Schneider.  “I’m proud that our kids stepped up today, that they’re fired up about being in the hunt for a league title and defended our home field like this.”

Alex Lagesse (Beecher, Ill./Beecher) pitched another stellar game in a season full of them to earn the shutout victory in the opener, improving to 12-7 on the season.  Lagesse gave up just three hits and no walks while striking out eight batters.  Only one runner made it past first base, as a leadoff triple by Angie Funston in the second gave the Ramblers a prime scoring opportunity.  But Lagesse responded by striking out the next two batters on a total of six pitches, and then induced a groundout back to the circle to squelch the threat.

Meanwhile, one big blow was all the Crusaders would need to earn the win, and that hit came in the third inning.  Tori Brown (Harrison, Ohio/Harrison) led off the frame with a double down the left-field line, and KC Boldt (Red Wing, Minn./Red Wing) reached on a grounder to third when Brown danced far enough off second to draw the attention of the third baseman before sliding back in safely.  Sara Strickland (Phoenix, Ariz./Horizon) followed with a full-count walk to load the bases, and Joylyn Ichiyama (Torrance, Calif./Redondo Union) needed just one pitch to clear them, drilling a first-pitch double down the left-field line to score all three runners.

Valpo would plate another insurance tally in the bottom of the sixth inning.  Sadie Conner (Washington, Ill./Washington) led off with a hard-hit double before being replaced by pinch-runner Jill Jacobson (Beecher, Ill./Beecher).  Two batters later, Jessie Marinec (Alsip, Ill./Marist) reached on an infield single off the pitcher’s glove that advanced Jacobson to third, but the freshman Marinec made a heads-up play, allowing herself to be caught in a rundown between first and second that provided Jacobson the opportunity to race all the way home.

Funston went the entire way in the circle for the Ramblers, falling to 8-3 after giving up six hits and four runs while striking out seven.  Ichiyama led the way for the Crusader offense in the opener with a 2-for-3 effort to go along with her three RBIs, while Conner also picked up a pair of base knocks.

The second game started out as the same type of low-scoring affair.  Valpo had an opportunity to put runs on the board in the first inning with two in scoring position and one out, but could not crack the scoreboard.  The Ramblers took a 1-0 lead in the top of the third on a two-out RBI single by Jenna Grim which scored Brooke Andresen.

But that all changed in the fourth inning.  With one out, Kelsey Phalen (Batavia, Ill./Batavia) reached on an infield single, and Conner followed with a first-pitch homer to left-center field to give the Crusaders a 2-1 lead.  For the junior, it was her seventh round-tripper of the year, fourth-most in a single season in Valpo history.

But that wasn’t nearly it for the Crusader offense in the fourth frame.  Lisa DeBruzzi (Carlisle, Mass./Concord-Carlisle) kept the train rolling with a single into center field, and then on a sac bunt attempt by Marinec, she reached safely with a single when nobody covered first base for Loyola.  Brown followed with an RBI single back up the middle to score DeBruzzi and advanced to second on the defense’s reluctance to make a play on her with a runner poised on third.

Boldt made it six straight Crusaders to reach when Marinec scored on a squeeze bunt, as the throw went home but not in time to catch the freshman.  Strickland then lined a two-run triple down the right-field line, and Ichiyama followed with a hard-hit single into center field to plate Strickland with the seventh run of the inning, as Valpo took a 7-1 lead into the fifth.  The game ended via run rule in the bottom of the fifth frame on a pair of RBI pinch-hits by Whitney Warner (Greenwood, Ind./Center Grove) and Jennifer Hermanson (Beecher, Ill./Beecher).

Sam McGee (Bloomington, Minn./Jefferson) earned the victory in the nightcap to improve to 12-3, giving up just four hits and one run while striking out three in her five innings of work.  Lagesse and McGee are now both tied for fifth in Crusader history with 12 wins in a single season.  Hilary Payne, the first of three Loyola (16-19, 6-8 Horizon) pitchers in the second game, took the loss, giving up seven runs, all earned, in 3.1 innings in the circle.

Conner and Strickland both posted identical 2-for-3, one run, two RBI lines in the nightcap to pace the Crusader offense, as every spot in the Valpo batting order produced at least one base knock among the Crusaders’ 12 hits.  Andresen had three of the Ramblers’ four hits in the second game.

“Sadie really hit the ball well for us today, continuing her great play in the league,” said Schneider.  “Joy came up with a couple of key hits as well, something we’ve been waiting for from her.  Alex and Sam both did a great job for us in the circle, and Lisa did a good job handling the game behind the plate.  It was just a great day of softball for us.”

Valparaiso (29-13, 9-3 Horizon) and Loyola are scheduled to conclude their three-game series with a single game on Sunday at noon at the Valparaiso University Softball Field.  With the threat of inclement weather, keep refreshing www.valpoathletics.com for the latest updates on the game’s status.  If the game is played, live stats will also be available at the official Crusader website.