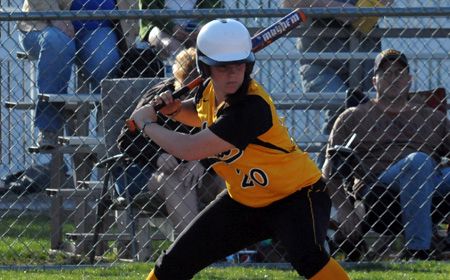 The Crusaders found themselves down five runs early to the Raiders in the opener.  Mollie Berry picked up an RBI infield single in the opening inning and a second run scored on a Crusader error, giving WSU a 2-0 lead after one frame.  In the second inning, the Raiders got an RBI double from Louie Haney and a 2-RBI single by Justine Shilt to claim an early 5-0 advantage.

Valpo erased a run from the WSU lead in the fifth inning, as Sara Strickland (Phoenix, Ariz./Horizon) connected on a one-out solo homer to right-center field, her second round-tripper of the year.  With a four-run deficit still staring them in the face, the Crusaders got off to a strong start in the seventh inning, as Jill Jacobson (Beecher, Ill./Beecher) led off with a walk and Tori Brown (Harrison, Ohio/Harrison) followed by getting hit by a pitch.  Strickland reached on a grounder to second base when the Raider second baseman threw the ball away, letting Jacobson score to get Valpo back to within 5-2.

Two batters later, Kelsey Phalen (Batavia, Ill./Batavia) drew a full-count walk to load the bases and bring the potential go-ahead run to the plate.  Sadie Conner (Washington, Ill./Washington), who re-entered the game after taking a ball off her knee in the field two innings earlier, then legged out an infield single to score Brown and cut the deficit to two runs with the bases still loaded.  Jessie Marinec (Alsip, Ill./Marist) drove in another run with a groundout, plating Strickland, but Valpo would not be able to push the tying run across the plate.

Alex Lagesse (Beecher, Ill./Beecher) took the loss in the circle for Valpo, falling to 12-8 after giving up five runs, four earned, in 1.1 innings, while Shaleigh Jansen (Ottawa, Ill./Ottawa Township) tossed 4.2 scoreless innings of relief.  Allison Cox improved to 8-3 with 5.1 innings of shutout ball in the start for Wright State.  Conner picked up a pair of hits to lead the Crusader offense in the opener, while Strickland crossed the plate twice.

The Raiders also jumped out to a lead in the first inning of the nightcap, as they took a 1-0 lead on a wild pitch in the opening frame.  Valpo grabbed a run back in the top of the third, as Jordan Rutkowski (Alden, N.Y./Alden) doubled down the right-field line to score Strickland, but Wright State answered back in its half of the third with an RBI groundout by China Frost to re-gain the lead, 2-1.

Wright State plated two more runs in the fifth inning on another RBI groundout by Frost, followed by an RBI squeeze bunt from Shilt.  Then in the sixth inning, the Raiders got a pair of insurance runs on a double by Haney to increase their advantage to 6-1.  Another RBI double by Rutkowski scored Strickland to slice a run off the deficit, but that would be all for the Crusaders as they dropped the second game of the doubleheader.

Sam McGee (Bloomington, Minn./Jefferson) fell to 12-4 after taking the loss for Valpo, giving up four runs in 4.2 innings, only one of which was earned.  Melanie Heyne improved to 9-12 for Wright State (22-24-1, 13-7 Horizon) with four innings of one-run ball, while Cox earned her fourth save of the year with three innings of relief work.  Brown, Rutkowski and Strickland each tallied two hits in the nightcap.

Valparaiso (29-15, 9-5 Horizon) looks to reclaim second place in the league standings from the Raiders tomorrow, as the two squads conclude their three-game series with a single game Wednesday at 1 p.m. CDT.  Live stats and live chat will be available at www.valpoathletics.com.