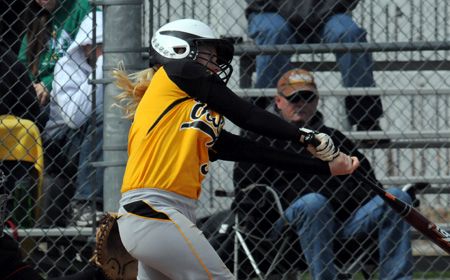 It was a record-setting Senior Day at the Valparaiso University Softball Field Saturday afternoon as the Crusaders swept Youngstown State, 8-0 and 4-1, in Horizon League action.  The latter victory was Valparaiso’s 31st of the season, the most wins in a single season in school history, while numerous other school records fell during the twinbill.

The 31 wins breaks the previous school record set back in 2008, when the Crusaders went 30-19.  Seniors Carrie Franson (Arlington, Wis./Poynette) and Whitney Warner (Greenwood, Ind./Center Grove) now have won 113 games over their four seasons, the most by a senior class in program history.  Both saw action on Saturday, with Franson registering a pair of outs in the seventh inning of game two.  Warner started at designated player in both games, going 1-for-4 with a pair of successful sacrifice bunts that led to runs scoring.

“It’s always good when you can win two games on Senior Day, with it being such an emotional day,” said Crusader head coach Randy Schneider.  “I thought it was a great day, obviously, with us breaking the wins record, which is a credit to our kids.  I’m especially proud of both our seniors.  Whitney had a nice day, getting the big hit in the first game to get our offense going and coming up with a couple nice sacrifices in the second game, showing the lead she is.  It was good to see Carrie come into the second game and get a couple of nice outs for us too.”

In addition to the single-season wins record, this year’s Crusader squad set new single-season marks by ending the day with 261 runs scored, 225 runs batted in and 618 total bases, all three records previously held by last year’s team.  Also, sophomore Sara Strickland (Phoenix, Ariz./Horizon) had three hits on the doubleheader to end the day with 59 hits this season, breaking Shannon Robinson’s record of 58 hits in a single season, set in 2007.

It looked like none of the offensive records would fall in the early going Saturday, as the Crusaders were held off the scoreboard for the first four innings of the opener.  But Alex Lagesse (Beecher, Ill./Beecher) was keeping the Penguins off the board as well, carrying a no-hitter into the fifth inning.  Valpo finally broke through in the fifth frame, as Jessie Marinec (Alsip, Ill./Marist) led off the inning with her second double of the game.  The freshman advanced to third with two outs and then scored the game’s first run on an error by the YSU third baseman.

The game would end via run-rule after the sixth, however, as the Crusaders put a seven-spot on the scoreboard in the final inning.  Warner got the train rolling with a one-out single and Kelsey Phalen (Batavia, Ill./Batavia) followed with a single of her own.  Marinec brought both runs home with a triple, her third extra-base hit of the game, and then scored on an RBI single by Joylyn Ichiyama (Torrance, Calif./Redondo Union).

Two batters later, KC Boldt (Red Wing, Minn./Red Wing) registered a pinch-hit RBI single to increase the Crusader lead to 5-0 and tie the single-season records for both runs (254) and RBIs (219).  After a YSU pitching change and a hit batsman, Jordan Rutkowski (Alden, N.Y./Alden) ripped a two-RBI single into center field, breaking both team records and pushing the advantage to 7-0.  Two batters later, first-year pitcher Amanda Bolton (Phoenix, Ariz./Horizon [Arizona]), stepping to the plate for her first career at-bat, ended the game with a bloop single behind second base that scored Strickland.

Lagesse cruised to the victory, throwing six shutout innings while giving up just two hits and hitting one batter.  The shutout was the sophomore’s fourth of the season and improved her record to 13-9.  Danielle Chase started in the circle for the Penguins and took the loss to fall to 2-4, giving up seven runs in 5.1 innings.  Marinec paced the Valpo offense, which picked up ten hits, with a 3-for-3, two run, two RBI effort.

The records continued to fall right away in game two, as Strickland’s leadoff single in the bottom of the first broke the team single-season mark for total bases (608) and tied the individual single-season hits record.  The Crusaders hit the board for the first time in the second inning, as Phalen reached on an error as the leadoff batter and eventually came around to score on an RBI groundout by Jill Jacobson (Beecher, Ill./Beecher).

Strickland broke the hits record the next inning with a hard-hit leadoff triple to right field before scoring on a perfectly educated squeeze bunt by Ichiyama.  Youngstown State (14-33, 6-14 Horizon) got a run back in the fourth on a sacrifice fly by Kristen Philen, but Valpo answered immediately with a run in the bottom half of the frame when Phalen scored thanks to a throwing error on a sacrifice bunt attempt by Warner.  The Crusaders closed the scoring in the fifth on a one-out RBI single by Sadie Conner (Washington, Ill./Washington) to score Ichiyama.

Sam McGee (Bloomington, Minn./Jefferson) pitched a solid game in the circle for the Crusaders, going six innings and giving up just one run while striking out seven batters to improve to 13-4.  Shaleigh Jansen (Ottawa, Ill./Ottawa Township) earned her eighth save of the year, second-most in the nation, by coming in to retire the final batter with two on.  Cheryl Cale fell to 8-16, taking the complete-game loss for the Penguins.  Marinec and Strickland each tallied two hits in the nightcap, while Phalen crossed the plate twice.

“Jessie really hit the ball well for us today, hitting the ball hard and coming up with five hits,” said Schneider.  “I was really happy to see Alex throw the ball as well as she did today against a good-hitting Youngstown State team, coming off of a couple tough games this week.  Sam really pitched well for us today as well.”

Valparaiso (31-16, 11-6 Horizon) closes out its home portion of the 2010 schedule with the series finale tomorrow afternoon against Youngstown State.  First pitch is slated for noon, and all the action can be heard live on WVUR, 95.1 FM, Valparaiso and online at www.valpoathletics.com, which will also have a link for live stats.