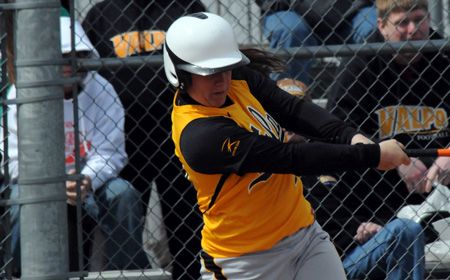 A three-run home run by Jordan Rutkowski (Alden, N.Y./Alden), her second of the game, in the bottom of the sixth inning completed Valparaiso’s rally from a five-run deficit, and the sophomore eventually drew a bases-loaded walk in the bottom of the eighth to score Sara Strickland (Phoenix, Ariz./Horizon) with the game-winning run as the Crusaders completed a three-game sweep of Youngstown State with a 9-8 victory Sunday afternoon at the Valparaiso University Softball Field.

The Penguins jumped on top right away Sunday, as Haley Thomas led off the game for YSU with a solo homer down the right-field line.  But the Crusaders came back with a tally of their own in the bottom half of the first.  Strickland and Joylyn Ichiyama (Torrance, Calif./Redondo Union) led off the Crusaders’ first at-bat with back-to-back singles.  A fielder’s choice off the bat of Jessie Marinec (Alsip, Ill./Marist) erased Ichiyama from the basepaths, but with runners on first and third, Valpo successfully pulled off a double steal as Strickland crossed the plate to tie the game.

Youngstown State put three runs on the scoreboard in the third when Kristen Philen picked up an RBI single and two other Penguin runners scored on errors.  Valpo got a run back in the bottom half of the inning when Strickland led off with a triple and Ichiyama drove her in with an RBI single, but a three-run homer by Jordan Ingalls in the fourth inning gave the Penguins a 7-2 advantage through three-and-a-half innings.

The Crusaders continued to chip away with single tallies, as Jennifer Hermanson (Beecher, Ill./Beecher) connected on a pinch-hit solo homer to lead off the bottom of the fourth and Rutkowski went yard with nobody on and one out in the fifth, cutting the deficit to 7-4 through five innings.  Thomas scored on a Valpo error in the top of the sixth, though, pushing the YSU lead back to four runs.

The first two Crusaders went down in order in the bottom of the sixth, but Strickland got the rally going with a two-strike swinging bunt placed perfectly to the right of the second baseman, easily beating the throw for an infield single.  Ichiyama then hit a slow roller towards second base, and Strickland slid in underneath the tag attempt to keep the inning alive.

Marinec drove the first pitch she saw into center field for an RBI single, scoring Strickland.  Then Rutkowski stepped up and, on a 2-1 pitch, drove a pitch far over the left-center field wall, clearing the scoreboard and nearly reaching the tennis courts to tie the game at 8-8.  The round-tripper was the 39th for the Crusaders as a team this season, surpassing last season’s team record of 38.

Neither team could get a runner into scoring position in the seventh, sending the game in extra innings, and the Penguins went down in order in the top of the eighth.  In the Valpo half of the eighth, Strickland continued swinging a hot bat, drilling a double to the right-center gap.  Ichiyama followed with a single down the left-field line, advancing to second with the YSU defense concerned about Strickland on third.  Marinec got intentionally walked to set up a force play at any base with nobody out, but Rutkowski never had to take the bat off her shoulder, taking five pitches, four of which were balls for the walk-off walk.

Alex Lagesse (Beecher, Ill./Beecher) started the game in the circle for Valpo, tossing 2.2 innings.  Shaleigh Jansen (Ottawa, Ill./Ottawa Township) threw 1.2 innings of relief, and then Sam McGee (Bloomington, Minn./Jefferson) finished the game with 3.2 innings of work, giving up just two hits and one unearned run while striking out four to improve to 14-4 this year.  Cheryl Cale took the loss for Youngstown State (14-34, 6-15 Horizon), falling to 8-17 after starting, coming out and then re-entering, throwing a total of 4.2 innings and allowing seven runs.

A number of Crusaders had stellar days at the plate.  Rutkowski went 2-for-3 with two walks and five RBIs, while Ichiyama had her first career four-hit day at the plate, going 4-for-5.  Strickland also registered her first career four-hit day, going 4-for-5 as well while scoring four runs as well, the second time in her career she has crossed the plate four times.  The sophomore also set Valpo’s individual single-season total bases record, ending the day with 93 to break Ashley Wolter’s record of 87 set last year, one day after breaking the single-season hits record.

“I was happy we got the win today to complete a three-game sweep, but I was disappointed in the way we played,” said Crusader head coach Randy Schneider.  “But it was good for us to win the way we did, having to come from behind, and will be good experience for us heading into these next couple weeks.  I thought Sara really continued swinging the bat really well, thought Joy hit the ball well today also, and it was nice to see Jordon’s bat come back with a pair of big homeruns.”

Valparaiso (32-16, 12-6 Horizon) enters the final weekend of Horizon League play tied for second place with UIC and Wright State, and will head to regular season champion Cleveland State next weekend for its final regular-season series.  The series starts with a Saturday doubleheader at noon CDT, with live chat available for both games at www.valpoathletics.com.