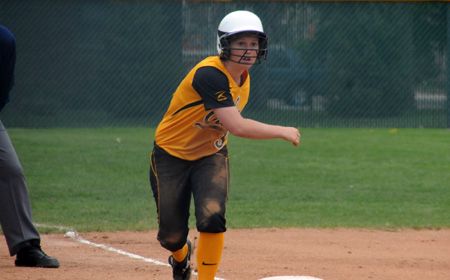 Strickland surpassed the record for single-season hits, previously 58 by Shannon Robinson in 2007, in the nightcap of Saturday’s twinbill with Youngstown State and ended the week with 63 hits to date this year.  The sophomore proceeded to break the total bases record, previously 87 by Ashley Wolter in 2009, on Sunday, ending the week with 93 total bases.

Strickland, the Crusaders’ leadoff hitter and center fielder, ended the week 12-for-21 (.571) at the plate over Valpo’s six games, tallying 11 runs scored while registering two doubles, two triples and a homer.  She also walked once and was hit by pitches twice, ending the week with a .625 on-base percentage, and swiped four bases.  Strickland picked up hits in all six games, including a career-best four hits Sunday against the Penguins.  She also scored runs in all six games, extending her streak of consecutive games scoring to ten contests.

On the year, Strickland raised her batting average to .414 with last week’s performance, and the sophomore now paces the Horizon League in league-only play in batting average (.482) and on-base percentage (.561).  Strickland becomes the fifth different Crusader hitter to earn Batter of the Week honors this year, as better than half of Valpo’s starting lineup has now earned a weekly accolade from the league office.