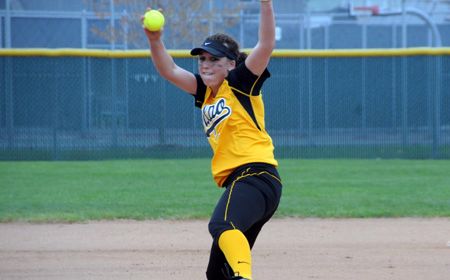 The Matchups: Seeding for the 2010 Horizon League Championship is on the line this week as Valparaiso (32-16, 12-6 Horizon) heads to regular season champion Cleveland State (39-13, 19-2 Horizon) to close out the regular season slate with a three-game series.  The Crusaders still can finish anywhere from the second to fifth seed for this year’s championship event.

Previously in Valpo Softball: It was a week of extremes last week for the Crusaders.  Valpo traveled to Wright State mid-week for a three-game league series, falling in all three matchups by scores of 5-4, 6-2 and 10-5.  But the Crusaders bounced back with a three-game sweep at home over Youngstown State when the weekend rolled around, downing the Penguins 8-0 (6 inn.), 4-1 and 9-8 (8 inn.).  Sara Strickland hit .571 at the plate over the six games to earn Horizon League Batter of the Week honors.

Series History: Cleveland State holds an 11-5 advantage in the all-time series over the Crusaders, including 4-1 in Valpo’s first two seasons as a Horizon League member.  Last year, the two teams met in a three-game series to close the regular season at the Valparaiso University Softball Field, but the visiting Vikings took home three victories by scores of 6-2, 10-5 and 7-1.  Sadie Conner went 4-for-8 with a pair of doubles over the three games, while Strickland went 4-for-10 with three stolen bases.

Following the Crusaders:  Live statistics and live chats will be available for all three of this weekend’s games, as well as all the action next weekend at the Horizon League Championship, through www.valpoathletics.com.

Winningest Team: This year’s incarnation of the Crusaders became the winningest squad in program history with their second win against Youngstown State on Saturday, breaking the 2008 team’s record of 30 wins.  This year’s squad now has 32 victories with at least five scheduled games remaining.  The senior class of Carrie Franson and Whitney Warner are also by far the winningest class in Valpo softball history, with 114 wins and counting over their four-year careers.

Danger - Falling Records: The wins record is just one of many set already this year by the 2010 Crusaders.  Just last weekend, Valpo set team single-season marks for runs, RBIs, homers, total bases and saves after having already blown by the doubles mark earlier in the year.  In addition, Sara Strickland broke the individual single-season records for hits and total bases last weekend as well.  For a full list of top-five placements on the single-season and all-time charts, see page three of the notes.

Home Dominance: Valpo’s three-game sweep of Youngstown State last weekend concluded easily the Crusaders’ best home campaign since the Valparaiso University Softball Field opened in 2003.  Valpo ended the year with a 12-1 (.923) mark at home, with Sunday’s victory surpassing the 2008 team’s 11 wins at the eight-year-old facility.  This year’s 12 home wins are the most at any field since the 1987 team won 13 home games.

Youth Shall Be Served: While this year’s team has done things no other squad in program history has done, it’s worth noting that the 2010 edition of the Valparaiso softball team is extremely young, as this year’s Crusaders have just two seniors (catcher Whitney Warner; pitcher Carrie Franson).  Four juniors, seven sophomores and five freshmen round out the 19-player squad.

Strickland Stands Out: Sophomore Sara Strickland has been a consistent force at the top of the Crusader order all season long, but has raised her game the last two weeks.  Over the last nine games, Strickland is 17-for-30 (.567) with 14 runs scored, six extra-base hits, five RBIs and five stolen bases while also registering three outfield assists.  She earned HL Batter of the Week honors last week, her first career weekly accolade from the league office, after batting better than .500 and setting new Valpo single-season records for hits and total bases.  The sophomore has been especially stellar in Horizon League play, leading all players in league-only games with a .482 batting average and a .561 on-base percentage, the latter of which is 61 points higher than any other league player.

Rutkowski Powers Up: Sophomore Jordan Rutkowski was the catalyst for Valpo’s come-from-behind win over YSU on Sunday, hitting two home runs, including the game-tying three-run shot in the sixth inning, before drawing a bases-loaded walk-off walk to win the game.  Her five RBIs give her 36 on the season, second-most in a single year in school history and good for fifth in the league.  She also has now drawn 26 walks, tied for second-most on Valpo’s single-season charts as well.  She enters the final week of regular season play fifth in the league in batting average (.379) and slugging percentage (.645) and third in on-base percentage (.487).

Conner Dominates League: While she struggled a bit last week, junior Sadie Conner still ranks among the Horizon League’s best hitters in league play.  Conner enters the final week of regular season action with a .459 batting average in league-only games, trailing only teammate Strickland, and ranks fourth in slugging percentage (.754) and fifth in on-base percentage (.476).  The junior also has driven in a team-high 19 runs in Horizon League action.  Meanwhile, in the field, Conner is just two assists away from breaking Valpo’s single-season record of 132 and is in position to lead the league in the category.

Marinec Doubles Her Pleasure: Freshman Jessie Marinec swung a hot bat as well for the Crusaders last week, going 8-for-19 (.421) with four runs scored and four RBIs.  She also tallied five extra-base hits on the week, including four doubles.  The quartet of two-baggers gives her ten doubles so far this season, making Marinec the fourth Crusader to crack double figures in the doubles category.  Her four runs scored last week increased her tally this year to 35, already fourth-most in a single season in program history.

Ichiyama Moves Runners Along: Sophomore Joylyn Ichiyama has been tasked most of this season with batting in the two spot in the lineup, and has produced in that spot, especially in league play.  In league-only games, Ichiyama is batting .412 for the Crusaders, sixth-best in the league, following an 8-for-16 week last week.  She has also laid down a team-high four sacrifice bunts in league play.

McGee Shuts Down Bats: Sophomore Sam McGee continued her stellar Horizon League campaign last week, going 2-1 in four appearances with a 1.31 ERA, striking out 14 batters while walking just two in her 16 innings of work.  McGee earned the win in the nightcap of Saturday’s doubleheader against YSU with six innings of one-run ball, and then gave up just an unearned tally in 3.2 innings of relief to record the victory Sunday as well.  The sophomore leads the league in league-only play with a 1.28 ERA and opponents are hitting just .239 against her in league action.  Her 14 wins overall this season are tied for third-most in a single year in program history.

Quickly: Sophomore Shaleigh Jansen extended her own single-season record with her eighth save in Saturday’s nightcap win over YSU ... the Crusaders’ eight saves this year also ties the team single-season mark ... sophomore Alex Lagesse picked up her fourth shutout of the season in the opener against YSU ... the win was also her 13th of the season, tied for fifth-most in a single year in Crusader history ... freshman Amanda Bolton registered an RBI single in her first career at-bat Saturday to close Valpo’s win in the opener ... Valpo’s team single-season runs and RBI records both fell on the same play Saturday, a two-RBI single by Rutkowski in the sixth inning of game one ... the Crusaders rallied from a five-run deficit to earn Sunday’s win, matching their largest comeback win this season (March 5 vs. Gardner-Webb, down 5-0, won 8-6 [9 inn.]).