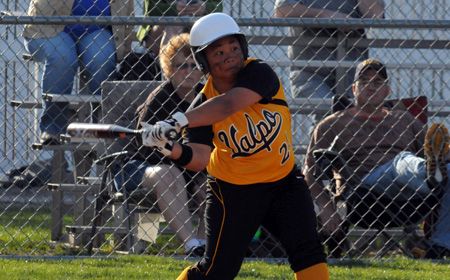 Valparaiso lost two games at league leader Cleveland State on Saturday afternoon, seeing a late-game rally come just short in a 3-2 loss in the opener before getting one-hit in a 7-0 loss in the nightcap.

The Vikings got on the board first in the opener as Jessica Burt led off the game with a double down the left-field line and scored two batters later on an RBI single by Katelyn Ciminelli.  Valpo had a golden opportunity to tie or take the lead in the top of the fourth, but could not plate even one run despite having the bases loaded and nobody out.  CSU took advantage to extend its lead in its half of the fourth when Amy Powell connected on a two-run homer to straight-away center field.

The Crusaders started erasing the deficit in the top of the fifth, getting a solo homer on a line drive to right field off the bat of Joylyn Ichiyama (Torrance, Calif./Redondo Union).  Then in the sixth inning, Jessie Marinec (Alsip, Ill./Marist) reached on an error, advanced to second on a passed ball and then came all the way around to score when a pop-up by Kelsey Phalen (Batavia, Ill./Batavia) got caught up in the wind and fell in behind shortstop.  Sara Strickland (Phoenix, Ariz./Horizon) reached on a leadoff walk trailing by one in the seventh, but could not advance past second base.

Alex Lagesse (Beecher, Ill./Beecher) took the loss for Valpo, falling to 13-10 while striking out six in her six innings of work.  Amanda Macenko earned the complete-game win for Cleveland State to improve to 34-13.  During the opener, Sadie Conner (Washington, Ill./Washington) broke the Crusader single-season record for assists in a single season, ending the day with 138 assists from her third base position, while the team single-season hits mark also fell on a Strickland single in the third inning.

Macenko mowed down the Crusaders in the finale, giving up just a leadoff double to Ichiyama in the seventh along with one walk.  Tess Sito connected on a solo homer in the bottom of the first to give the Vikings the only run they would need, while CSU added three runs apiece in the third and fourth innings to complete the scoring.

Sam McGee (Bloomington, Minn./Jefferson) fell to 14-5 with the loss in the nightcap, giving up four runs, all earned, in her three innings, while Shaleigh Jansen (Ottawa, Ill./Ottawa Township) tossed the final three innings.  Macenko earned her 35th win of the 2010 campaign for Cleveland State (41-13, 21-2 Horizon).  Phalen broke Valpo’s single-season mark for putouts in the nightcap, closing Saturday’s twinbill with 366 putouts at first base this year.

“Obviously Cleveland State is the conference champion, and they’re a better softball team than we are right now,” said Crusader head coach Randy Schneider.  “For us to beat them, we’re going to have to have all three facets of the game working, and today only our defense was where it needed to be.”

Valparaiso (32-18, 12-8 Horizon) concludes the regular season on Sunday with a single game against the Vikings at 11 a.m. CDT.  Live stats and live chat will be available at www.valpoathletics.com.