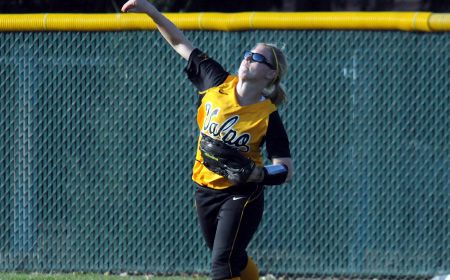 The Vikings hit the scoreboard immediately in the bottom of the first inning.  Leadoff hitter Jessica Burt doubled to the right-center gap to start their half of the inning, and after stealing third later in the frame scored on an RBI single by Amy Powell.  Cleveland State had chances in the early innings to put more runs on the board, having the bases loaded with two outs in the first and with one out in the third, but Crusader hurler Sam McGee (Bloomington, Minn./Jefferson) fought her way out of both jams.

Valpo, which saw its first eight batters retired in order, had its first significant scoring chance in the top of the fourth.  With one out, Joylyn Ichiyama (Torrance, Calif./Redondo Union) singled up the middle and then Jordan Rutkowski’s (Alden, N.Y./Alden) sacrifice bunt attempt turned into a single when the ball spun away from the Viking fielders to put two on.  But a strikeout and a pop-up ended the Crusader threat.

Cleveland State (42-13, 22-2 Horizon) added to its lead in each of the next two innings.  Tess Sito drove in Megan Bashak with an RBI single in the fourth, and then Bashak turned around in the fifth and brought home two runs with a two-out double to increase the Viking lead to 4-0.  The Crusaders got a run back in the top of the sixth as Sara Strickland (Phoenix, Ariz./Horizon) launched a solo homer to center field with one out, but CSU would answer with a home run of its own by Katelyn Ciminelli in its half of the sixth to close the scoring.

McGee took the loss for the Crusaders, falling to 14-6 after giving up three runs in her 4.1 innings of work, while Alex Lagesse (Beecher, Ill./Beecher) tossed the final 1.2 innings for Valpo.  Amanda Macenko pitched all 21 innings of the series for the Vikings and earned her third victory of the weekend, improving to 36-13 with her complete game, 10-K effort.  Rutkowski picked up two of Valpo’s five hits on the day.

Valparaiso (32-19, 12-9 Horizon) closes the regular season already with a program record for victories in a single season and finished the Horizon League slate in fourth place, two places above where it was picked entering the year.  The Crusaders will be the fourth seed for the HL Championship, and will play either Butler or Green Bay to kick off tournament play Thursday, depending on today’s results.