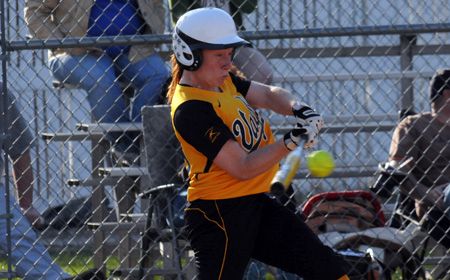 Early home runs from Sadie Conner (Washington, Ill./Washington) and Tori Brown (Harrison, Ohio/Harrison) propelled fourth-seeded Valparaiso to a 4-0 victory over fifth-seeded Green Bay in first round action at the Horizon League Championship in Cleveland, Ohio Thursday morning.  With the win, the Crusaders advance to play top-seeded ClevelandState at 1:30 p.m. CDT this afternoon.

The Crusaders got the game started out on the right foot in the bottom of the first.  Sara Strickland (Phoenix, Ariz./Horizon) led off with a line-drive single into center field, and three batters later Conner took a 2-2 pitch and drove it over the left-field fence for a two-run homer, putting the Crusaders on top 2-0.  For the junior third baseman, it was her team-best eighth round-tripper of the year, tied for third-most in a single season in Valpo history, and her 13th career four-bagger, also third-most all-time at Valpo.

One inning later, it was the freshman Brown who provided the long ball, as the Crusader right fielder sent the first pitch she saw over the left-field fence for a solo shot, pushing the Valpo advantage to 3-0.  Valpo would add another insurance run in the sixth inning when pinch-runner Hayley Bridwell (Lemont, Ill./Lemont Township) stole second with two outs and then scored on a line-drive double by Lisa DeBruzzi (Carlisle, Mass./Concord-Carlisle).

But one run would have been all Crusader hurler Alex Lagesse (Beecher, Ill./Beecher) needed on this game.  The sophomore tossed a complete-game shutout, escaping a second-and-third, none-out jam in the fourth and a two-on, one-out conundrum in the fifth.  Lagesse scattered five hits while striking out seven Phoenix hitters, improving to 14-10 on the season.  Katie Cooney started and took the loss for Green Bay (26-19), falling to 11-10.

“I’m just proud of our kids, they just came out and swung the bat hard today,” said Crusader head coach Randy Schneider.  “We played great defensively as well, and I thought Alex pitched a great game.  I’m certainly happy to be in this situation, and hopefully we’ll just continue to play well throughout the tournament.”

Valparaiso (33-19) returns to Viking Field in just a couple hours, as the Crusaders face the host Vikings at 1:30 p.m. CDT.  Live stats and live chat will be available at www.valpoathletics.com.