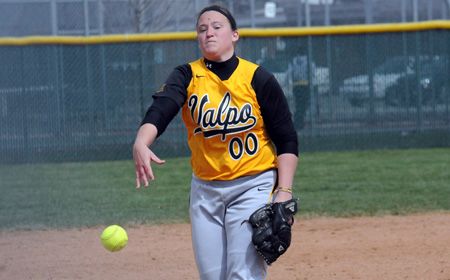 Alex Lagesse (Beecher, Ill./Beecher) continued her tremendous string of pitching performances at the 2010 Horizon League Championship, giving up just four hits as Valparaiso shut out Green Bay, 1-0, Saturday afternoon in Cleveland, Ohio.  The Crusaders advance to face Wright State Sunday morning for the right to earn a berth in the championship series.

“I think when you get in a situation like this, in a tournament where nobody has hit real well due to tough pitchers, your defense and pitching need to be really solid if you want to win games,” said Crusader head coach Randy Schneider.  “Alex, obviously, has pitched one heck of a tournament so far and has accomplished so much over the last two days, and we’re all very proud of her.  I’ve got to also credit our defense behind her, they’ve been playing hard and making great plays when we’ve needed them.”

Lagesse scattered the Phoenix’s four hits over four separate innings and also gave up just two walks.  The sophomore struck out a season-best ten batters as she recorded the complete-game shutout of Green Bay for the second straight day.  Lagesse has now pitched three complete games and has appeared in all four games in the tournament and carries a 0.28 ERA in tournament action into Sunday.

Valpo got its only run of the game, the only one it would need, in the bottom of the second inning.  Sadie Conner (Washington, Ill./Washington) and Jennifer Hermanson (Beecher, Ill./Beecher) led off the inning with back-to-back singles.  Lisa DeBruzzi (Carlisle, Mass./Concord-Carlisle) laid down a perfect sacrifice bunt to advance both runners into scoring position, and pinch-runner KC Boldt (Red Wing, Minn./Red Wing) would score on a groundout to short by Jessie Marinec (Alsip, Ill./Marist).

“I’m happy we managed our situation in the second inning like we needed to,” said Schneider.  “We got the one run out of it, and obviously it was the deciding run in the game.  Whenever you can win a one-run game, you feel good.”

The rest of the game belonged to Lagesse and the Crusader defense.  Valpo allowed no Phoenix runner past first base in the first five innings.  But the Green Bay offense threatened in the sixth frame, as a pair of walks sandwiched an error by Lagesse to load the bases with one out.

As she’s done all tournament, however, Lagesse rolled a pair of ground balls, the first of which Conner threw home to force the lead runner on.  The next was right to Marinec at short, who flipped to Joylyn Ichiyama (Torrance, Calif./Redondo Union) at second for the force to escape the jam.  Then in the seventh, Lagesse did all the work herself, striking out the side around a one-out single to advance the Crusaders to Saturday’s play.

Lagesse improved to 15-11 on the season with the complete-game win, while Katie Cooney fell to 12-11, taking the tough-luck loss for Green Bay (27-20).  Four Crusaders each tallied a hit, led by Sara Strickland (Phoenix, Ariz./Horizon), who went 1-for-3 with a walk and two stolen bases.

“These type of games, low-scoring one-run games that we’ve seen all tournament, are tough to pitch and tough to defend,” said Schneider.  “But that’s been the tune of the tournament, and its going to come down to pitchers running lanes and getting ground balls and the defenses maintaining focus and making plays.”

Valparaiso (35-20) extended its single-season school record for victories with the win and will now face Wright State on Saturday morning at 9 a.m. CDT for the right to move on to the championship.  With a win, the Crusaders would have to defeat Cleveland State twice later Saturday to earn the title.  Live statistics and chat for all games tomorrow, along with live video through the Horizon League Network as well, will be available at www.valpoathletics.com.