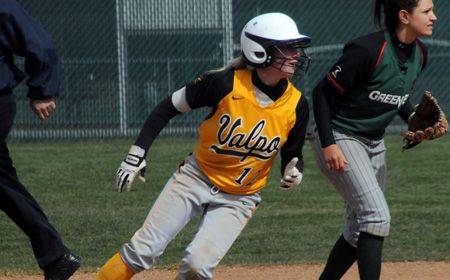 The Valparaiso softball team will be bringing home some hardware from its annual spring break trip to Florida, as the Crusaders defeated Bethune-Cookman on Sunday morning, 5-2, in the championship game of the Hatter Classic in DeLand, Fla.

“We had a good approach right from pregame today,” said Crusader head coach Jordan Stevens.  “We knew what adjustments we had to make, and from the first hitter through our entire lineup, everyone had the right approach.”

Valpo and Bethune-Cookman matched up in the title game by virtue of allowing the least runs through the first two days of tournament action, as all four teams went 2-2 over Friday and Saturday.  The Wildcats struck first on Sunday morning, plating a run in the top of the second when Simone Ceasar singled to bring home Michelle Banuelos-Smith.

But the Crusaders literally responded immediately in their half of the second, as senior KC Boldt (Red Wing, Minn./Red Wing) tied the game with a solo homer to right field on the first pitch of the inning.  Sophomore Tori Brown (Harrison, Ohio/Harrison) followed with a solo bomb of her own to left field to give Valpo a 2-1 lead, the Crusaders’ first back-to-back homers since Jordan Rutkowski (Alden, N.Y./Alden) and Sadie Conner (Washington, Ill./Washington) went deep in consecutive at-bats against Northern Illinois on Mar. 31, 2010.

Valpo wasn’t done scoring yet, however, pushing across yet another run in the second.  A pair of singles put two runners on with two outs, forcing Bethune-Cookman to yank starting pitcher Chastity Sanders in favor of reliever Allison Garcia.  Sophomore Hayley Bridwell (Lemont, Ill./Lemont) greeted Garcia with a single into left field, plating freshman Angie Doerffler (Fort Wayne, Ind./Concordia Lutheran) to push the Crusader advantage to 3-1.

“They threw [Garcia] right back out there today after she shut us down yesterday, and we did a much better job with her today,” said Stevens.  “We took her best pitch away from her early on and ended up chasing her quickly from the game.”

Bethune-Cookman got a run back in the top of the third thanks to a solo home run by Aurelia Gamch, and later in the frame, a two-out single led Stevens to the bullpen to bring in junior Sam McGee (Bloomington, Minn./Jefferson), who got out of the frame with no further trouble.  Valpo offset the Wildcat run with a tally of its own in the bottom half of the inning, as Brown singled with one out and eventually scored on a Conner single.

McGee gave up back-to-back singles to Bethune-Cookman to start off the fourth inning, but that would be it for the Wildcats, as the junior retired the last 12 hitters in order.  The Crusaders posted another insurance run in the bottom of the sixth when Bridwell reached on a two-out infield single and Rutkowski doubled to bring her around to score.

“Sam was prepared to come in at any time in the game today,” said Stevens.  “She’s not somebody we usually bring out of the pen, but she was in the right mindset for the role today and came in throwing very well.  Alex didn't throw poorly, but [Bethune-Cookman] made adjustments on her, so it was a matter of having to give them a different look, and Sam did just that for us.”

McGee threw 4.1 innings of two-hit shutout ball to improve to 3-0 on the season, while Sanders took the loss for Bethune-Cookman (5-10), falling to 1-4.  Brown went 3-for-3 to lead the Crusader offense, while Bridwell and junior Sara Strickland (Scottsdale, Ariz./Horizon) each tallied two hits as Valpo picked up a total of 12 hits on the day.

“It was definitely a good tournament for us to be in, with four pretty evenly-matched teams,” said Stevens.  “We played well for the most part, despite being up and down at times.  Even yesterday's outcomes, we can take a lot from those, because things that happened during those two games will help us grow and get better later in the year.  I’m proud of the way we came back today, against a team that shut us down, to be able to come back less than 24 hours later and play the way we did was impressive.  Now we have to be able to keep this kind of energy and roll it over into our next two weeks.”

After a day off, Valparaiso (5-4) returns to action on Tuesday, Mar. 1 with a pair of games in Orlando at UCF.  The Crusaders take on #9/7 Michigan, which is 15-0 on the year, at 1 p.m. CST before facing the host Knights at 3:30 p.m.  Live stats for both games will be available at www.valpoathletics.com.